My first visit to Givat Avoda in Saalfelden was not enjoyable. I didn’t like the place. It took me almost 35 years to realize how important this place is for my family heritage.

My mother, Bilha Talit – in those days known as Bella Klein – is a Holocaust survivor from the Kaunas ghetto in Lithuania and the Stutthof concentration camp. Even though she never told us what she went through during the Holocaust, our family heard stories about her life in Givat Avoda, which is the Displaced Persons camp located in Saalfelden. We always knew that in addition to being a teacher at the camp, she was a member of the Bricha organization. As part of this activity, she crossed the Alps from Austria to Italy several times, accompanying groups of Holocaust survivors who were on their way to Israel (then still Palestine). We always knew that our parents (my father was originally from Palestine/Israel) met each other at the camp, fell in love and had their wedding ceremony in the camp’s main dining room. 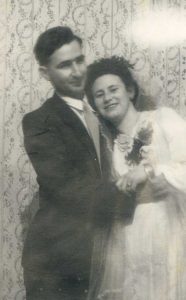 One story in particular stands out from my mother’s accounts about the Alp crossings.  I do not know if this actually happened. Mother said that on one of her journeys across the Alps, on her way back from Italy to Austria, she sank into the deep snow at the top of the mountain, one foot in Austria and one foot in Italy, and could not continue walking. Her friends from the Bricha, whom she was accompanying, had to pull her out of the snow while leaving her boots in it. Only then did they manage to extract her boots out of the deep snow and continue their journey back to the camp in Saalfelden.

I first visited Givat Avoda camp in Saalfelden in the summer of 1973 as a child. It was the first time my parents had returned to Austria since leaving it in 1948. As part of our tour, we visited Saalfelden and searched for the Displaced Persons camp. My mother and father were very excited to visit the place, but I, as a child, found our visit to the camp very boring. Although the technologies available to us today did not exist in 1973, we were able to locate the Austrian lady who worked as a cook in Givat Avoda back when they resided there. We even met her and her family in the village of Seefeld in Tirol to where she had moved and had opened a family restaurant. Following this visit, for several years afterwards, mother and father met with the cook every time they visited Austria. For many years, I kept in touch with her youngest son, who was close to my age. That was the end of my 1973 experience of visiting the Saalfelden DP camp. I did not find the place interesting. At the time, I did not know how significant this place would become for me in the future.

I did not find the place interesting. At the time, I did not know how significant this place would become for me in the future.

Everything changed in the summer of 2007, when my father got in touch with Ernst Löschner. This happened after my father listened to a radio program in which it was stated that the Austrian Embassy in Israel was looking for people who lived in the DP camp in Saalfelden after World War II and crossed the Alps to Italy. After the bond between my father and Mr. Löschner was formed, both my parents were invited to attend the first APC, along with additional Israeli testimonial witnesses. Mother was already very ill at the time. My brother, Uzi (who lives in Florida, USA) and I decided to join this delegation. We came to the realization that this could be our last journey together with our mother. Sadly, this turned out to be the case as my mother passed away 6 weeks after our return to Israel. Despite not feeling well, during this last visit, mother was so happy to recount her experiences when she was young. 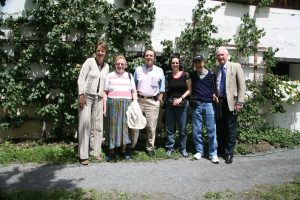 I arrived in Austria in 2007 with no intention of completing the entire trek all the way to Italy. I did not think I could withstand the journey. But when I realized that some other members of the group from Israel who were older than I was, intended to complete the trek, I decided to give it a try as well. I did not have suitable clothing or hiking equipment, so I improvised. Each friend gave me one much needed item – walking poles, a coat, a scarf etc. I completed the trek in a similar vein to those who did it in 1947 – they also didn’t give up despite not having the proper hiking equipment. With sheer willpower, perseverance and a lot of encouragement from my fellow trekkers, I completed my first Alpine Peace Crossing march, not knowing then that it would be only the first of many. 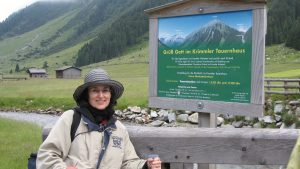 Since 2007, I have continued to attend almost all yearly APC events. I was joined by my brother, Uzi, who came from the United States every year and attended them all. In the first few years after 2007, we were the only Israelis. Slowly, more Israelis joined. In addition, we held two youth delegation exchanges between high school students from Saalfelden, Austria, and from the Upper Galilee, Israel, where the respective visits in each country took place in 2010 and 2013. One component of the Israeli students’ visit in Austria included the participation of both delegations in the APC.

Over the years, a number of family members of the Israeli testimonial witnesses who were invited to participate in the first Alpine Peace Crossing in 2007 have participated in the APC events, with only a few other additional Israelis participating. This changed in 2015 following the publication of the APC events on Guy Shachar’s travelling website. Many Israelis who were exposed to this website, found that it was their family heritage as well and the Israeli interest in APC grew. At about the same time, in 2012, the Bricha Heritage Association was established with the aim of presenting the experiences of Holocaust survivors who travelled throughout Europe on their way to Eretz Israel (Land of Israel), led by members of the Bricha organization. The association’s wish to commemorate the legacy of the crossing of the Alps from Saallfelden, via the Krimmler Tauern Pass to Kasern (Casere) in Italy in the summer of 1947, became one of its main activities.

Since 2017, one decade after the first APC, groups of several dozen Israelis participated in the APC every year. Participants now are first, second and third generation of the 1947 trekkers. They recreate, in part or in full, their ancestors’ journey across the Alps. In this way, they preserve the legacy and memory of past generations, whose members have either perished or survived the hardships on their journey to the Land of Israel.

The participants from Israel recreate their ancestors’ journey through the Alps. In this way, they preserve the legacy and memory of past generations

Let us hope that the trees planted on the path of the trek in the Grove of Flight, in honor of those who crossed the Alps in 1947, those who assisted them along the way and those recreating their history since 2007, will help ensure that the past is not forgotten. We owe it to all of them. We will remember them and their labor and never forget.

Information on the author: Gal Talit lives in Tel Aviv, Israel. She is a regional and urban planner, holds a PhD in public policy and works as a lecturer and researcher. She is involved in the activities of the Bricha Heritage Association (http://www.habricha.org.il/en/the-association).