The horrors of the Shoa did not come out of nowhere. For centuries, Jews in many parts of Europe have been disadvantaged, marginalized, persecuted, expelled and murdered. Already in the 14th century there was a pogrom against Jews in Salzburg. Also in the following time attacks took place continuously, until prince archbishop Leonhard von Keutschach decreed the expulsion of the last Jews from Salzburg in 1498. It was to take until the second half of the 19th century before they were allowed to settle in Salzburg again. 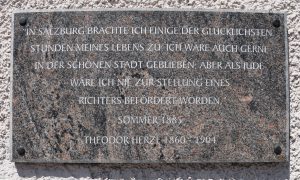 As Albert Lichtblau’s article shows, however, anti-Semitism was far from over: Discrimination, hostility and attacks continued to occur. For example, long before the annexation, various places in Salzburg advertised „Jew-free“ tourism offers, „Jewish cadastres“ were published in inflammatory pamphlets, and Jews were banned from wearing traditional costumes. In her article, Danielle Spera also deals with the connection of Austrian Jews to the Alpine region and the discrimination to which Jewish summer visitors and alpinists were exposed here. But it was not only in these areas that anti-Semitism represented a life-historical (core) experience of Austrian Jews even in the period before 1938, as Victoria Kumar makes visible on the basis of the memories of contemporary witnesses.

„Jews enter this place at their own risk.“

As is well known, this century-long development reached its terrible climax during the period of National Socialism. Shortly after the annexation, anti-Semitism became strikingly visible in the mountainous regions of Salzburg in a crude but nonetheless cruel form. In front of the entrances to Saalfelden, for example, banners proclaimed: „Saalfelden doesn’t need Jews!“ In Krimml – the starting point of our annual commemoration events – they went one step further. In Wild West fashion, it was proclaimed here, „Jews enter this place at their own risk.“ At that time, there was no longer any question of Jewish tourism in Salzburg anyway. A large part of Salzburg’s already small Jewish community was expelled or murdered in the following years.

As Bernadette Edtmaier makes clear, the liberation in 1945 was by no means synonymous with an end to anti-Semitism. Moshe Frumin, supported by his daughter Inbal Gildin, shares with us very personal memories of anti-Semitic experiences he himself lived through during this time. It is therefore not surprising that thousands of Jews were forced to flee across the Krimml Tauern in the summer of 1947. In this respect, 1945 did not represent a caesura at the universities either, as Alexander Pinwinkler vividly demonstrates. To this day, anti-Semitic incidents continue to occur in the university sector.

The right-wing extremist terrorist attack in the fall of 2019 on the synagogue in Halle shows that the chapter of anti-Semitism is still not closed, not only at universities. Jews are still not only hostile and marginalized, but also actually attacked and assaulted. But anti-Semitic stereotypes are also served in the media and public debates – not least in Covid-19 times – as can be read in Helga Embacher and Christian Schüller. The fact that anti-Semitic views are still present in the field of sports is made clear by Florian Schubert in his contribution.

Some things have certainly changed in the last decades: In the meantime, there are two kosher hotels in Pinzgau in the summer and Jewish guests are welcomed every year, not only to the Alpine Peace Crossing events. Nevertheless, even today (not only in Pinzgau) not everything is blissful – as can be seen in the just published anti-Semitism report of 2019.

For us, this historical and current problem is the reason to place this year’s focus topic of APC under the motto „In the shadow of the mountains – anti-Semitism yesterday and today“ and to devote ourselves to burning questions on the subject. We hope that this magazine will contribute to the ongoing discussion of this complex issue.

Information on the authors: Bettina Reiter is a high school teacher of English and physical education and treasurer of APC. Robert Obermair is a contemporary historian at the University of Salzburg and chairman of the board of APC.