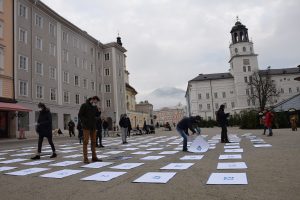 It was not an Advent calendar that was too big, but a memory game with 128 posters that caused a stir in the old town on Wednesday. At Residenzplatz, large memory cards were spread out on the ground over 60 square meters. They provided information about the 64 street names in the city area that still honor people involved in the Nazi regime. Passers-by were invited to find the matching signs with the respective photo of a street sign and the corresponding historical information. “The stories behind the Nazi-incriminated street names have been swept under the carpet by politicians for long enough,” explains Robert Obermair, chairman of the Alpine Peace Crossing association: “This action was an invitation to Salzburgers to take a closer look.”

According to the current state of knowledge, 46 streets and squares in the city of Mozart are named after prominent NSDAP members – until today. Another 18 honored persons were not party members, but part of the Nazi regime. Apart from a few prominent cases, such as Josef-Thorak-Strasse in Aigen, the dark past of many incriminated streets is little known. For example, Heinrich Damisch Street in Parsch is named after that journalist and co-founder of the festival who served as a mouthpiece for anti-Semitism and National Socialists and joined the NSDAP as early as 1932. “The research results amazed us ourselves. One of our team members has lived on one of the Nazi-incriminated streets for thirteen years without knowing it until now,” says Obermair. 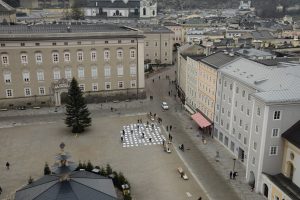 Waiting for the historian’s report

The report of the historian commission commissioned by the city of Salzburg on the street names should still be available by the end of the year. However, as became known after APC’s action, the completion of the report is delayed until summer 2021.

When this report is finally ready, Salzburg’s city politics must finally act. “It is up to the city’s politicians to assume their responsibility and take the overdue steps after decades of protracted debates. The city owes this to the victims and their descendants, but also to the residents who do not like to live in streets that were contaminated by the Nazis,” says Obermair. “We demand that the city’s politicians take their responsibility, i.e. rename where appropriate and ensure historical contextualization in public space.” 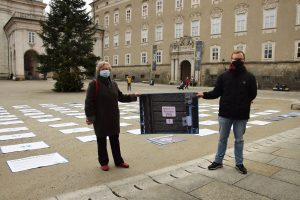