In Lend in Salzburg, Franz Bodmann’s gravestone at the local “cemetery of honor” has finally been causing a stir for some time, because Bodmann was an SS doctor in Auschwitz. To this day, Bodmann is honored at the Lender cemetery without comment, and twice, on a freestanding gravestone and on a war memorial at the back of the church. APC reported this in last year’s issue of our club magazine “Alpendistel. Magazine for antifascist commemorative culture” thematized.

From our point of view it is not acceptable that in the year 2021 the SS site doctor of Auschwitz is still kept in “honorable” memory on a “cemetery of honor” maintained by the public authorities.

Who was Franz Bodmann?

Franz Freiherr Hermann Johann Maria von Bodmann was born in Munich in 1909. He graduated in 1934 and was awarded a doctorate in medicine. Two years earlier, he had already joined the NSDAP in 1932 (No. 1,098,482). This was followed in 1934 by joining the General SS (No. 267,787). From 1939 he also became professionally active for the SS: From October of that year until June 1940, and then again from July 1941 until January 1942, he was a doctor in the 79th Standarte of the Allgemeine SS in Ulm. During this time, he rose to the rank of SS-Obersturmführer – an officer rank comparable to the rank of first lieutenant today. The further career of the father of three children in the Nazi system reads like an account from a horror movie.

After entering active service in the Waffen-SS at the beginning of 1942, he was transferred to the Auschwitz concentration camp as a camp doctor at the end of January 1942. A few months later, in May 1942, he was appointed site physician there. In this position he was not subordinate to the camp commandant in technical matters, but was his advisor in medical matters. The position was endowed with considerable authority. Thus, he was not only responsible for hygiene and sanitary facilities in the camp; he was now also subordinate to the SS troop physicians (who cared for the SS personnel), the SS camp physicians, the SS pharmacists, and the medical service grades. Because of these far-reaching powers, the attitude of the camp doctor was often a decisive one for the health and medical conditions in the camp.

Part of the organized murder

Bodmann’s case cruelly illustrates how doctors in the Nazi system exploited their positions of power completely contrary to any medical ethics, for Bodmann showed initiative in murdering in his new position: According to reports from former concentration camp inmates, he introduced the method of killing sick prisoners with phenol injections. Unlike some other SS doctors, who retreated to the command level in this regard, he himself was also personally involved in murder operations with phenol injections.

Bodmann showed initiative in killing in his new position.

While other of his murderous tasks, such as conducting selections after which the selected prisoners were gassed, were – as cruel as it sounds – part of the “standard duties” of camp doctors, Bodmann also showed in other matters that he was willing to go even further. For example, according to the report of a former concentration camp inmate, Bodmann forbade bandaging a Jewish woman who had been shot. The image of the bleeding woman was intended to serve as a deterrent to other inmates.

Bodmann remained site physician at Auschwitz until mid-August 1942. After contracting typhus, he did not return to Auschwitz. Subsequently, he was the 1st camp physician of the Lublin-Majdanek concentration camp (Poland) until April 1943. In the meantime, however, he may have been assigned at least for a short time to Neuengamme concentration camp (Germany), where he apparently participated in the murder of Soviet prisoners of war with Zyklon B in the fall of 1942 as SS site physician.

Bodmann subsequently traveled widely: from April to August 1943, he was assigned as 1st camp physician at the Natzweiler-Struthof concentration camp (France). He then performed his “service” as chief physician in the Vavaira concentration camp (Estonia) and its subcamps. From mid-September 1944 he was assigned to the SS-Wirtschafts- und Verwaltungshauptamt at Amtsgruppe D (inspection of concentration camps). In mid-October 1944, he transferred to the Main Office Volksdeutsche Mittelstelle. From August 1944 he was also a doctor in the 5th SS Panzer Division “Wiking.” In this formation he probably remained until the end of the war.

When Bodmann became part of this SS division, it was already in retreat, first to Hungary and, after the defeat in the Battle of Budapest, across Czechoslovakia to Austria. After the general surrender of the Wehrmacht, the “Viking” Division ceased combat operations on May 8, 1945. Many of the division members, presumably including Bodmann, now became U.S. prisoners of war in the Salzburg district of St. Johann im Pongau.

Silent end in the Salzburg Hinterland

On May 25, 1945, Bodmann committed suicide in the military hospital of the “Markt Pongau” prisoner-of-war camp in St. Johann im Pongau. However, he was buried in Lend at the local military cemetery. Why he was buried here in particular is still unclear. One assumption is that the priest in Lend at the time ran a kind of infirmary and not only cared for the sick from the POW camp in St. Johann here, but possibly also transferred those who had already died here for burial.
In 1950, the local military cemetery was officially established as an “honorary cemetery” of the Austrian Black Cross. Today it is located in a part delimited by a small wall in the cemetery behind the local church. Here are two rows of stone crosses, several memorial plaques, a stone group of people and a carved wooden cross. On one of the stone crosses the name Franz Bodmann can be found. Interestingly, Bodmann is not the only “foreigner” who found his final resting place here. Presumably this has to do with the fact that other dead from St. Johann were buried here, because Bodmann’s name also appears on a wooden coat of arms as part of a war memorial at the back of the local church. Here he is included in a list of twenty “members of the police” who had succumbed to their wounds in the military hospital in St. Johann and were buried in Lend.

Since the Bodmann case has suddenly become topical again in recent months, opinions have been divided not only in Lend about how to deal with it. Should the gravestone be removed? Or should an explanatory plaque be put up, as suggested by the historian Rudi Leo?

The mayor of Lend, Michaela Höfelsauer (SPÖ), seems very committed to the matter. Even before the Bodmann affair became known, Lend had already been intensively occupied with the NS history of the village; in 2018, a memorial plaque for the former pastor of Lend, Kaspar Feld, who was persecuted by the National Socialists, was inaugurated. However, she believes that it is too hasty to quickly put up an explanatory plaque about Bodmann. It is not yet known with certainty whether there are other graves in the local military cemetery that would at least have to be contextualized. This does not seem unlikely, because even a brief look around the site reveals, for example, the gravestone of a Knight’s Cross bearer. In order to clarify questions such as these, she had already commissioned extensive research.
At the same time, there are fears that the grave could become a pilgrimage site for right-wing extremists if an explanatory plaque is added. This is also not entirely unfounded, because Bodmann’s grave – as one of the few at the military cemetery – is already regularly decorated with flowers. Remarkably, also the abbreviation “Pol.” (presumably incorrectly for “Police”), has been scratched out of the inscription on his gravestone. Obviously, this is intended to belittle him as an “apolitical” doctor. 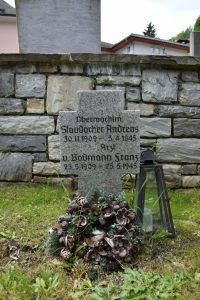 One thing is certain: urgent steps must be taken to come to terms with the Bodmann case and its questionable dignification at the “cemetery of honor”. Grinding the grave is not a satisfactory solution. Even if this seems at first glance to be a simpler solution than an uncommented memorial for an SS murderer, it would all the more conceal past injustice. A courageous artistic and remembrance-political intervention would be desirable in order to break with the military “hero” staging of the military cemetery itself.

For example, one could consider moving Bodmann’s gravestone and those of other gravestones at the military cemetery that may also be incriminated and engraving historical contextualizations of the crimes committed on their backsides. An alternative would be to cover Bodmann’s grave with plexiglass panes listing his crimes from the Nazi era and at the same time addressing the question of Austria’s culture of remembrance after 1945.

His hands were those of a butcher and his eyes were cold, pitiless windows.

Until a larger artistic and historical reappraisal and contextualization is realized, at least the installation of an explanatory plaque in the form of a publicly visible statement together with a clear demarcation from the atrocities of Bodmann is necessary. It could thus take on the function of a (financially manageable) interim solution until the research mentioned by Höfelsauer is completed, with which a recontextualization of the local commemoration should be set in motion. For an uncommented “honorable” commemoration of a murderous Nazi perpetrator like Bodmann, described by Orli Reichert-Wald, the camp elder in the prisoner infirmary of the Auschwitz-Birkenau concentration camp, in the following words, cannot be borne one day longer: “His hands were those of a butcher and his eyes were cold, pitiless windows.” 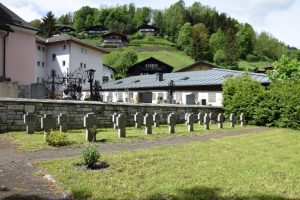 A part of the local military cemetery; in the back on the right there is the gravestone for Bodmann

Many questions are still open. Only one thing seems to be clear to all involved: After 75 years of silence, Bodmann’s grave can no longer be ignored. The fact that the community leadership recognizes the urgent need for action – and this should be the case in the municipality of Lend with its mayor – can be seen as a promising starting point for visibly rethinking and redesigning the local memorial. One can only hope that the municipality will not wait too long to become active in the matter of Bodmann. Then it will also become clear whether it will receive support for the redesign, for example from the Catholic Church or from politics.

“(War) memorials as identity foundations of the survivors” – if one sees the scope of this concept coined by the renowned historian Reinhart Koselleck extended to other stone witnesses of memory such as the tomb of the Nazi criminal Bodmann, then a redesign literally imposes itself in order not to remain stuck in the problematic remembrance of the dead of the past.

Our original research on Franz Bodmann was published in June 2020. As noted above, Lender Mayor Michaela Höfelsauer is also not happy with this uncommented tribute to a Nazi perpetrator in the local cemetery. However, she cannot decide anything in this case, because the “honorary cemetery” is under the control of the Austrian Ministry of the Interior, which has declared that the municipality is not allowed to change anything about it.

Since an article by Thomas Neuhold in the Austrian daily newspaper Der Standard on April 20, 2021, a new dynamic has come into the movement. This was followed on April 24, 2021 by a press release from the International Auschwitz Committee calling on the Austrian Ministry of the Interior to “now immediately ensure that information is provided at the grave of Franz Brodmann about his misdeeds and that similar cases in Austria are brought to urgent clarification.”