September 19, 2019 was the day for Marko Feingold to leave for another world. His wife Hanna was with him when he pointed first to himself and then upward at about 2 pm. Peacefully he fell asleep.

I was fortunate to be with him as his last visitor two days earlier to say goodbye. He squeezed my hand and a smile adorned his beautiful, dignified face when I was able to tell him that the young board of directors we would soon be appointing for APC would especially like to bring the youth to Krimml for the APC Peace Walk.

How much he cared for the youth! Whoever was allowed to witness how he, as a centenarian, gave countless students his personal historical awareness of the time from 1930 to the 1950s in the temple of the Salzburg religious community, will probably never forget it.

Three days before my farewell visit to Marko, I stayed longer with Hanna. Marko was already very weak from an infection, but his will to live seemed unbroken. Nevertheless, it was like a last legacy when he suddenly said to Hanna and me: “All religions belong together, then people will live in peace.”

For me, these words were all the more meaningful, marking a view of the world that was not always his. In the intensive years of our collaboration and friendship since the founding of APC in 2007, there had been a serious conflict between us – only once, but nevertheless: he became visibly critical, and finally even dismissive, of the Muslim refugees whom we had invited to Krimml for the APC events. He said that they were ALL anti-Semitically indoctrinated, and that APC should also remove them from our support programs, as we would be encouraging “imported anti-Semitism”. Only when I was able to make it clear to him that for APC humanity cannot and must not be a divisible good, that we feel obligated to all persecuted people without any discrimination, did his initially negative attitude move in the direction of more acceptance or tolerance.

Every year since 2007 Marko has been with us in Krimml at APC events and as an honorary member of APC also at our celebrations in Vienna and Tel Aviv for 70 years of Jewish Exodus Krimml.

For all of us at APC, as well as for the 5,500 “Krimml Jews” and their descendants, Marko Feingold is a beacon of courage and determination radiating throughout the world, as a symbol of hope for all people who have to flee. We all bow down to this small, great man. He survived four concentration camps, he lived to be 106 years old, what a miracle! In his face there was always seriousness and mischievousness, his eyes flashed until the end, just as his humor flashed again and again.

We miss you, Marko! We thank you for your great personal commitment to APC. There will be no APC in Krimml without us feeling you. 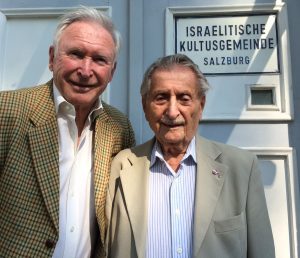