For a long time, the focus on “heroic”, military and armed resistance obscured the view of other acts of resistance. Resistance is therefore still often thought of only in male terms. The achievements of women are devalued or not seen. 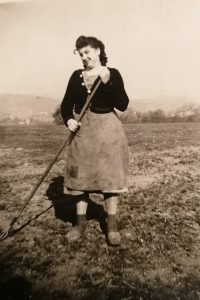 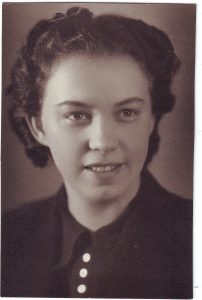 Women rebelled in many ways against the rules and norms of the National Socialist regime. We would like to briefly introduce two of them here:

Berta Grubhofer (16.01.1913-24.02.1984), a married woman of Lauscher, was already active in the communist youth association during the Austrofascist era, for which she was imprisoned twice. This did not prevent her from acting in a resistant manner even after the National Socialist takeover in 1938. She organized escape routes for communists in danger and smuggled some across the Czech border. After being imprisoned again, Berta Grubhofer nevertheless distributed anti-Nazi leaflets, collected support for prisoners and their relatives, and worked to establish a broadcasting station in Upper Austria. In March 1943, she was arrested again and finally imprisoned without trial in the Ravensbrück women’s concentration camp starting in July. After almost two years of imprisonment, she returned to Vienna in May 1945.

Aloisia Hofinger (01.06.1922-16.03.2011), a married woman of Schober, met the Polish forced laborer Josef Gowdek at her workplace with an Upper Austrian farmer. They fell in love, Aloisia became pregnant. Denounced by an older maid, both were arrested, interrogated and tortured at the beginning of May 1942. The Gestapo released Aloisia Hofinger from the Linz police prison to give birth. The fact that the brother of her godmother assumed paternity for the girl born in July was of no use to Aloisia and Josef. Aloisia Hofinger was taken to the Ravensbrück women’s concentration camp four months after giving birth. After a good year, she was released in November 1943. Before that, she had to assure in writing her silence about the concentration camp imprisonment. In the meantime, her daughter had died of diphtheria. The father of her child was hanged.

What counts as resistance?

The stories of these two women stake out the range of resistant acts – from organized, sometimes armed resistance to civil disobedience or resistance. Between these two poles, there were numerous other acts of resistance: women hid endangered persons (such as paratroopers, racially persecuted persons, or deserted relatives), performed courier services for partisans, listened to “foreign radio stations,” supplied resistance fighters with food and medicine, wrote and distributed flyers, told jokes critical of the system, sang songs of the oppositional shuffling movement – a youth subculture – and much more. All these actions required courage and determination, and many of them were extremely dangerous. Nevertheless, for a long time many of these activities did not count as resistance against the National Socialist regime.

This was very narrowly defined. Resistance was defined as having fought against the Nazis with a weapon in hand and for decidedly political reasons. In other words, actions had to be aimed at overthrowing the regime. This view, held by the postwar governments and also by political victims’ associations, had the positive effect – from the point of view of official Austria – of keeping government spending on compensation payments under the Victims’ Welfare Act low. Only those who could prove that they had been active out of political conviction and within the framework of a group received compensation. In this context, reference was made to the “Moscow Declaration” of 1943, which demanded proof that Austrians had participated in the fight against Nazi rule in order to reestablish Austria. In this important document, however, the state of Austria was also seen as a victim of Hitler’s Germany. This circumstance made it possible to extend victim status to the whole of society – while at the same time recognizing only a few forms of resistance. Even later governments did not expand the circle of eligible persons for a long time. A fundamental amendment of the OFG did not take place until 2005, at the instigation of the “KZ-Verband” and the “Freedom Fighters” as well as the Green Party.

Individual acts of opposition were not perceived as resistance.

Individual acts of opposition – i.e., actions not carried out by groups – were not perceived as resistance. Actions taken by individuals out of love, compassion and empathy were not only denied their potential political character, they also remained unappreciated. Thus, women like Aloisia Hofinger, who resisted the racist population policy with her love affair with a forced laborer, were not considered to have acted “for political reasons” against National Socialism. This had far-reaching material consequences for the majority of those persecuted: While Berta Grubhofer was recognized as a victim, this was denied to Aloisia Hofinger. The latter therefore received compensation for her imprisonment only after the amendment of the OFG (2005). From a psychological perspective, the non-recognition of Berta Grubhofer as a victim meant a lack of appreciation by society for her resistance and civil courage, as well as for the suffering she had endured, and indirectly placed the blame on those persecuted.

But it was often women who courageously resisted the dictates of an inhuman regime.

For a long time, the focus on “heroic,” military and armed resistance obscured the view of everyday acts of resistance that were not primarily politically motivated. However, it was often women who courageously resisted the dictates of an inhuman regime without the support of an organization. Not infrequently, this led to imprisonment and concentration camp detention. Feminist-oriented historical research was needed to make visible the resistance activities of women and the many forms of resistance and civil courage.

Quantitatively, only a minority of the Austrian population resisted the Nazi regime, which nevertheless demanded a high blood toll with over 2,000 Austrians sentenced to death and executed. The majority of them belonged to “left-wing”, and here again predominantly communist-oriented resistance groups. It is also undisputed that more men than women were politically active or were persecuted for it. And yet, women were also active in leading positions in the organized political resistance, and without the cooperation of women, even the small scale would not have been possible. Moreover, there were quite a few women who were imprisoned in prisons and concentration camps for political reasons. Our research on Austrian women imprisoned in the Ravensbrück women’s concentration camp revealed that almost half of the approximately 2,400 women elicited were registered as “political” prisoners. Among them were women who, like Berta Grubhofer, were part of the organized resistance, and women who, like Aloisia Hofinger, were persecuted for “forbidden intercourse”. Furthermore, they included women like those from Goldegg im Pongau who hid their deserted husbands, brothers and sons and/or provided them with the necessities of life. Not marked with the red triangle of “political” prisoners were women who were persecuted because of their “non-conformist behavior,” which included refusal to work or a lifestyle that deviated from the norm. They also behaved in a resistant manner, but were considered “asocials” in the diction of the time. This stigmatization has persisted to this day, so that they were denied recognition of their suffering and compensation for many decades.

The evaluation of the resistance of women (and men) is not least a question of the standards one uses. If one were to judge the resistance in its entirety solely by its contribution to overthrowing the Nazi regime and regaining state sovereignty, it would have to be seen as failed and ineffective. There was a lack of money, material, and substantial support from the rank and file of the population to achieve such a goal. An overpowering apparatus of informers often put a quick end to acts of resistance that were often carried out with great idealism. However, an evaluation based solely on effectiveness ignores the moral component of the resistance and fails to recognize the extreme differences in power. Even if reach and effectiveness were low: many small resistance networks at least tried, at great personal risk, to put sand in the well-oiled gears of the “Third Reich.”

The National Socialist regime would have perished even without these resistance groups and individual activities. However, the existence of an organized Austrian resistance was decisive for the regaining of state sovereignty due to the demand in the “Moscow Declaration”.

What remains is the evaluation of individual resistance; the significance of actions that people took out of empathy, affection, fellow humanity, a spirit of resistance and the like. In our view, these resistant women (and men) stand for all those who remained “decent” in the face of a totalitarian system’s “demand for obedience,” as historian Karl Stadler put it. For in a totalitarian system, “any opposition in the Third Reich must be counted as an act of resistance, even if it is only an isolated attempt.”

Therefore, the achievements and sacrifices of the resistance fighters for regaining state sovereignty and building a democratic social order cannot be overestimated. Their contribution cannot be quantified, but it cannot be denied. It is equally undeniable that women played a significant and decisive role in the resistance. Without them, resistance would not have been possible.

In this book, the authors portray three female resistance fighters and their resistance groups and analyze how the family dealt with the women’s resistance history.

Further stories of resistance and persecution by women can be read: