Ernst Löschner initiated Alpine Peace Crossing thirteen years ago. With a great deal of sensitivity, energy and perseverance, he developed APC together with many supporters and friends as its chairman for many years. Now he has handed over the leadership of the association to a new generation. In an interview with Kay-Michael Dankl, Ernst takes a personal look back.

“For 40 years I had already tried to make the incomprehensible comprehensible to me. If that had been repressed and forgotten, I wanted to bring it out of oblivion.”

Kay: Dear Ernst, how did you personally come to APC?

Ernst: It goes back to a mountain tour in 2003 in Krimml on the Dreiherrenspitze. In a thunderstorm, my Maria Alm mountain guide and friend Paul Rieder suddenly pointed to the opposite mountainside in the fog: “We may be ‘waschelnoss’ (extremly wet), but we have good shoes. The Jews who fled over there didn’t even have ‘g’scheite Schua’ (good shoes). That was after 1945.” I could hardly believe that. But it was clear to me: I want to pursue this matter. If it had been suppressed and forgotten, I wanted to get it out of oblivion. For 40 years I had already been trying to make the incomprehensible comprehensible to me, how it could come about that an entire people was repeatedly marginalized in order to ultimately destroy it. In addition, I grew up in Zell am See – not far from Krimml or Saalfelden, where the Givat Avoda camp was. But I never heard anything about it in school.

How did you experience the first APC hike?

After two years of preparation, in 2007 I organized a commemorative hike over the Krimml Tauern on the occasion of the 60th anniversary of the “flight of the Jews in 1947” with a peace dialogue on the evening before. It was my special wish to find at least two people who 60 years ago had themselves walked the arduous 15-hour path at night. The Israeli ambassador Dan Ashbel was very supportive and told me about the planned memorial walk in a radio broadcast that was broadcast worldwide. The next day there were 21 (!) calls. The Austrian embassy secretary in Tel Aviv told me: “There are people there for whom this is their life. They want to come so badly, but they can’t afford it.” At that time, I was still head of Austria at BNP Paribas and my initiative was supported by the goodwill of my bank. My president sent me €20,000 from Paris. Ten contemporary witnesses came to Austria, some with their partners. It was an incredibly touching experience, not only for these people, but for all 155 participants in the 1st APC Peace Walk.

What happened after the first hike in 2007?

The first Alpine Peace Crossing also caused a great echo in the media. The young mayor of Krimml, Erich Czerny, asked, “Ernst, would you continue this?” So APC has become an annual event. I knew the Peace Dialogue was an opportunity to address issues that are relevant to our society. In particular, I wanted to contribute to the discussion on European refugee policy. I literally “slid” into the refugee issue. Before that, I had little to do with it, except for 1992, when my wife and I took in a family of four from Bosnia. However, it was clear that we would like to invite current refugees to tell us about themselves during the walk and to share their fates with us. I became friends with many of the refugees. They told me about their traumas, which they normally don’t tell. So I recognized concretely what help would be most urgent, and in 2011 I made the decision to try to help myself, with social projects and my large network of friends.

At that time, we founded APC as a new non-profit association. That was a turning point, which became APC’s third focus. It’s a very busy but beautiful story. We were able to raise € 900,000 euros in 8 years for social projects, for example with “Zuhause”, where refugee families with deposit guarantees got an apartment, and with “Musik verbindet” in Pinzgau and in the city of Salzburg. In 2017, we inaugurated the Grove of Flight in the Krimml Achental Valley in an inter-religious ceremony. Along with the seven peace pyramids along the Flight Path, this was our most important cultural project.

In addition, there were many significant events in Vienna and in Israel, e.g. at the Radio Kulturhaus with Anton Pelinka and Chancellor Vranitzky, accompanied by music by Friedrich Cerha. Special highlights were the participation of BP Alexander Van der Bellen at the 11th APC 2017 in Krimml, and the annual participation of Marko Feingold with his 100+ years.

I would like to emphasize that without the invaluable contribution of many friends, the development and expansion of APC would not have been possible. I have acknowledged them individually on other occasions. This is how APC has grown and given so much back to me. The most important and beautiful thing is that several times descendants of contemporary witnesses have approached me: “You can’t imagine what Alpine Peace Crossing means to our family history. For the first time our parents, grandparents, uncles or aunts talked about this trail and their own experiences.” This feedback confirmed for me the rightness of our path. For myself, it has been a source of meaning in my life. 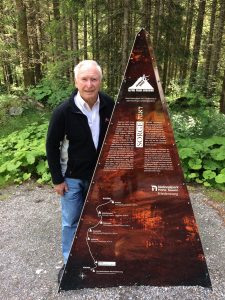 Ernst Löschner at the second commemorative plaque care of the APC peace path near the waterfall path.

APC has taken many steps with you. The most recent is to pass APC on to a new generation after 13 years. What was the impetus for this and how do you feel about it?

Today I am 77. When I was 75, I said to myself: “Actually, you are still in good shape! But it’s important to pass on the ‘farm’ in time – also in the sense that I can still contribute something.” So last year, as an “old farmer”, I retired to the “Austraghäusl”, to speak in peasant diction, right next to the “Hof”. So I am always there, if my ideas or experiences are still needed. The “Hof” now consists of two successor associations to APC. Their formation has been incredibly motivating for me.

The Salzburg professor of contemporary history Helga Embacher recommended Robert Obermair to me, who then introduced us to a team, so that now six young people between 21 and 34 continue the “Krimmler” focus of APC: Memorial Hike, Peace Forum, Grove of Flight. The social help (association APC-HELP) will be continued by Sepp Vinatzer with Bettina Reiter. As I felt in the discussions with both associations an enthusiasm with new ideas, I felt very well. These ideas include building bridges with the Forum Alpbach and with Easter Europe, the erection of peace pyramids in other places of destiny, topical themes for the Peace Forum, and integration projects for children and young people. A good course has been set for the future of Alpine Peace Crossing.

This is a nice outlook. Thank you, Ernst!

Information on the author: Kay-Michael Dankl (31), historian and local councillor in the city of Salzburg, has been supporting the APC as head of the Scientific Advisory Board since 2019