Since 2007, Alpine Peace Crossing (APC) has organized a commemorative hike over the Krimmler Tauern in memory of the “Krimmler Judenflucht” in 1947. Since issues such as flight and anti-Semitism are sadly still relevant today, the organizers are also devoting themselves to issues related to contemporary politics. But how did the project come about and what are the basic ideas behind it?

A summary of the founding history of APC by Caroline Huber (translated by Bettina Reiter).

It was a mountain tour to the Dreiherrenspitze (summit in Austrian Alps) in 2003, during which the former chairman and current honorary president of APC Ernst Löschner became aware of the history of the “Jewish Exodus” of 1947. Together with his son Lukas and his nephew Leonhard, he was surprised by a thunderstorm on the way down. The then mountain guide Paul Rieder from Maria Alm pointed out that at least they were equipped with good footwear, unlike the thousands of Jews who had to take the arduous route over the Krimmler Tauern in 1947 in order to flee to Palestine via Italy. Anti-Semitism was omnipresent in Europe at that time, even after the war.

The secret Jewish escape aid organization Bricha at that time helped around 5,000 Jews to flee across the mountains, starting from “Givat Avoda” – a Displaced Persons camp – in Saalfelden. 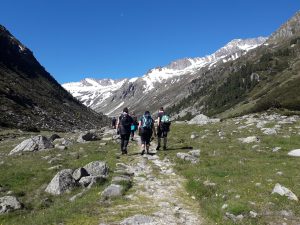 An almost forgotten section of Austrian post-war history, which was completely new to Ernst Löschner, who grew up in Zell am See and Salzburg. The nighttime 15-hour walk around numerous zigzag curves must have been extremely difficult for the people fleeing at the time. Löschner made the decision to find out what exactly happened at the time and wanted to follow the path over the Tauern with like-minded people – step by step, the same path that back then all these desperate people took in hope of peace and a better future. The idea of ​​”Alpine Peace Crossing” was born. Accompanied by mountain guides, the route should go from the Krimmler Tauernhaus via the Tauernscharte to Kasern in South Tyrol.

Basic ideas of the memorial hike

The preparation for the first Alpine Peace Crossing began in 2004. The first commemorative hike should take place in 2007, because then the historical event was to mark its 60th anniversary. The idea of ​​following the path of the refugees at the time and thus remembering the events was always accompanied by the desire to find contemporary witnesses and descendants and to invite them to join the hike. Initially the organisers were not particularly optimistic that they would succeed.  It was therefore especially delighting that the efforts were ultimately successful. At the first Alpine Peace Crossing, ten contemporary witnesses accepted the invitation to travel from Israel to Austria. To the present day, networking with contemporary witnesses and the relatives of the refugees of 1947 is an important concern of APC. 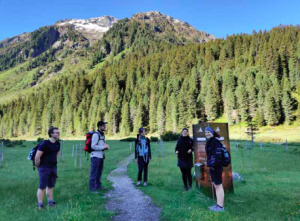 Another basic idea was to remember those helpers from back then who did not look away and tirelessly offered their help to others in need. Like, for example, the landlady of the Krimmler Tauernhaus at the time Liesl Geisler who provided the refugees with accommodation and supplies before continuing on via the Krimmler Tauern. Or the mountain guide Viktor Knopf who accompanied groups of 60 to 280 people on the mountain path up to three times a week.

In addition to remembering what happened back then, the people affected and the helping people, it has always been particularly important to the organisers of the memorial hike to bridge the past with the present and to refer to more current events. The hike also takes those who are currently fleeing and seeking asylum into account. Anti-Semitism in the present should also be contextualized. The focus of APC for 2020 is therefore “In the shadow of the mountains – anti-Semitism then and now”. Since 2019, there has been a new board team that carries the memorial work and the basic ideas of APC with a lot of vigour. It is of particular concern to the executive board team to make the younger generation aware of the topic. The founder of APC Ernst Löschner continues to actively support the organisation as honorary president.