Since the end of September 2019, Alpine Peace Crossing has a new board team. The commemorative hike and the dialogue forum in Krimml will continue to be the highlights of the APC year in the future. In addition to these events, the board wants to implement further projects.
An overview of the plans of the new board of Bettina Reiter.

In autumn 2019, Ernst Löschner handed over the commemorative hike to younger hands: The historian Robert Obermair was elected as the new chairman. The new board also includes the teacher and historian Antonia Winsauer, the teacher Bettina Reiter, the pedagogue Caroline Huber and the student Matthias Schreckeis. The Salzburg Museum employee Kay-Michael Dankl also supports the organisation as coordinator of the scientific advisory board. 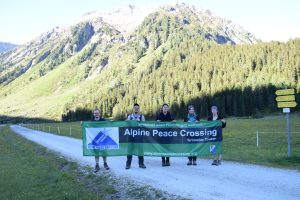 Specialization
With the generation change in the board fundamental courses for the future work of APC have also been set. After the organisation had grown significantly in the past few years through its commitment to both remembrance work and support for the needy and refugees, an evaluation process was the basis for a pioneering decision for the future of APC: an extraordinary general meeting on February 8, 2020 decided that APC’s previous work should now be continued in two specialized organisations.
Now APC-Help (as a continuation or further development of the organisation ALPINE PEACE CROSSING – Verein für Sozial- und Flüchtlingshilfe) takes care of the social projects and works mainly on a donation basis. The newly founded Verein für aktive Gedenk- und Erinnerungskultur APC (Alpine Peace Crossing), on the other hand, focuses primarily on the organisation of the annual commemoration events in Krimml and the active commemorative work that is in connection with it, such as the grove of flight.

General objectives of the board
We see the primary goal of our organisation’s work as communicating the historical events surrounding the flight of thousands of Jewish people via the Krimmler Tauern in 1947 in their historical complexity and its pre- and post-history. We do not want to solely look at the past event but also contextualize the topic of flight, anti-Semitism, racism, and hatred towards and discrimination against marginalised groups of society in the current situation. With this in mind, it is important to us to initiate debates, intervene in political and social discourses, advance research in this context with an interdisciplinary approach, and carry out educational work.

Every year an annual focus will be set.

By setting an annual focus, we want to deal with a specific topic every year. This should be dealt with in more detail at the dialogue forum (on the eve before the memorial hike in Krimml), various lectures, but also in the form of written publications, such as this magazine, and leads us through the year of APC like a common thread.

Reduce hurdles and boundaries
In a longer-term perspective, we would like to establish a number of projects and initiatives in the following years. The aim of these projects is firstly to reach new and above all younger target groups. Secondly, we want to get in contact with (organisations in) countries that were on the escape route of 1947.
In order to enable younger people to take part in the memorial events in Krimml, it is very important to us to remove obstacles that stand in the way of these people. We would have already managed to organise financial support for younger participants for the 2020 memorial hike, which unfortunately could not take place. However, we are confident that we will find sponsors for 2021 that are happy to support our cause and thereby help facilitate the participation of younger people. We also want to involve school groups more. This seems to be particularly relevant to us since the ever-decreasing number of contemporary witnesses will inevitably bring new challenges for commemorative work, as well as a need for new ideas and approaches. 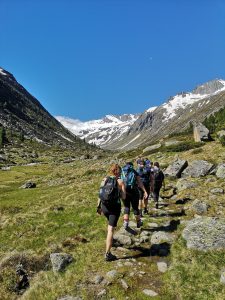 To achieve our second goal, we are considering, for example, intensifying the exchange with other countries through mutual visits and projects and possibly organising a travelling exhibition. There are also ideas for the construction of further commemorative pyramids on the former escape route – of which there are already seven between Krimml and Kasern, South Tyrol. In addition to selective projects, a long-term exchange such as school partnerships from Austrian and Polish schools is also conceivable and desirable.