When I was riding my bicycle along the Salzachkai in the city of Salzburg in the fall of 2020 and my gaze fell on a poster with the text “Erinnerung ist ein Gespenst” (“Memory is a ghost”) on the level of the Künstlerhaus, I was immediately captivated by this metaphor. The image works, I thought, on the collective level as well as the individual. Memories that we want to put to flight demand all the more attention. So it’s worth capturing them by being aware of them, capturing them linguistically, and telling them. In this way, they can perhaps be tamed.

Didactic reflections on the use of contemporary witnesses in history lessons by Adelheid Schreilechner. 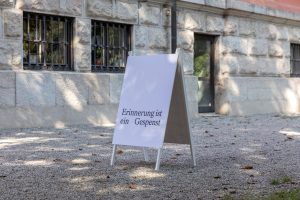 Narratives about the past are reconstructions. And they have a function. Those who tell stories want to explain, seek understanding, share their experience, prevent something very important from being lost. Sometimes he or she wants to teach the listeners a lesson. And there is always the silent, the omitted, the forgotten.

Many who sit across from Holocaust survivors and hear them recount their memories of persecution, personally experienced torture and Nazi extermination policies experience this situation very intensely: there is a tension in the room, there is uncertainty in reacting and asking questions, emotions arise. Many stories are touching, even move people to tears – it is almost unbearable what they had to endure, some reports trigger anger about what was done to them, some contemporary witnesses also trigger resistance with accusations. This dense atmosphere makes it difficult or even impossible to respond, to question. In this context, Maria Ecker-Angerer speaks of an “almost sacral reverence” that often prevents students from dealing objectively with people and their history.

The representation of the past depends on one’s own perspective.

So how should we deal with eyewitness accounts in the classroom? What role should they play? This question can only be answered through didactic goals. First, it is about countering the traditional family narratives in our society of perpetrators, which are still characterized by the narrative of the victim. By placing the perspective of the persecuted prominently in the classroom, we contribute to anchoring these narratives in our cultural memory. Furthermore, it becomes clear how much the representation of the past depends on one’s own perspective. It is not a matter of pitting one memory against the other, but very much a matter of looking at the big picture and asking the related questions: what tendencies in our view of history have persisted, why are they so deeply entrenched, what are the social and political implications of certain narratives, and why is it so important to break them down?

And beyond that? What to do with these narratives? “Not disturbance, but reconciliation is the goal of media communication between Holocaust survivors and that generation of grandchildren who are to be gripped and touched by their experiences,” writes Heidemarie Uhl. [1] Thus, being touched would be a didactic goal in the sense of reconciliation. Even if, as mentioned above, emotionalization happens in most cases anyway, it cannot be the goal. Moreover, it remains to be asked why being touched by an individual narrative should lead to reconciliation and which conflict parties to be reconciled could still be identified – in view of students from the 4th generation.

Since the “fundamental social debate on how to deal with the ‘unresolved’ Nazi past”, triggered by the so-called Waldheim Affair at the end of the 1980s, ended the decades-long cultivation of “post-war myths”, the significance of eyewitness accounts has also changed. Until then, it was mainly a matter of finally hearing them, taking their testimony seriously, paying attention to them and believing them, subsequently confronting the crimes committed and taking social responsibility for them. In the meantime, the official memory of the Holocaust has become something like “normative past”. So what remains to be done when the struggle for an honest narrative of Nazi history in one’s own country is more or less decided and on a pedestal? Today, the personal memories of survivors are to be used as sources in the sense of oral history.

Memories congeal into a myth that shapes individual or even collective memory.

Contemporary witnesses were “there”, have experienced history directly and report from their personal experiences. However, what is narrated must by no means be seen only as a report about past events, but must always be understood as a subjective processing of the experience of the events. By no means everything that was experienced is remembered, and not everything that is remembered can or wants to be told. Certain experiences have been memorized because they were experienced at the time as particularly incisive, intense, significant and thus formative, because they appeared relevant in retrospect, because they played a role in further life, not least because they had an effect in the telling and were therefore told again and again. Memories congeal into a narrative, into a myth, which shapes the individual – or certainly also the collective – memory. In these “stable memory modules,” as Henke-Bockschatz calls the stories about the past that are told over and over again, only certain aspects emerge, however; others remain omitted. Keeping this in mind does not mean accusing contemporary witnesses of misrepresentations or deliberate omissions. However, the location-boundness and the perspectivity of what is remembered and narrated must be taken into account and reflected upon. If students learn to deal critically with memories in class, they will be able to deal better and more reflectively with contemporary witnesses in their immediate environment. After all, young people are always surrounded by personal stories and reports about the past. And one of the central tasks of history teaching is to deconstruct historical accounts, i.e. to question them with regard to their perspectivity and location, and possibly also with regard to the intentions behind the narrative.

Deconstructing representations of history is a central task of history education.

The people who recount and have recounted the horrors of Nazi crimes have borne and continue to bear living witness to the murderous effects of totalitarian and authoritarian regimes; they represent the dangers posed by racism and anti-Semitism. They tell of how the gradual and systematic establishment of a radical system destroyed their previous lives, drove their relatives to their deaths, and in some cases awakened or released the cruelest instincts in the majority society, how a large proportion of the population became accomplices, profiteers, and more or less enthusiastic spectators, while others became silenced critics and, in far fewer cases, active resisters. When the elderly Jehudith Hübner recounts how her teacher in Vienna in 1938 acknowledged the statement of her neighbor at the bank, “My father said that all Jews are dirty dogs,” with the remark, “All right, if you don’t want to sit next to each other, then just sit apart,”[2] the mortification experienced at that time is immediately palpable. And when, a little later, she recounts how bitterly her little sister Edith cried when she was sent on a children’s transport to Palestine – a farewell forever – the human dimension of flight, expulsion and systematic murder becomes apparent.

By examining what such experiences mean for survivors and those born after them, the significance of history for a society becomes apparent. The descriptions of their experiences of discrimination and persecution raise awareness of the importance of human rights and threats to democracy.

Significance for the present and the future

At a time when the horror of National Socialism is once again becoming particularly clear in its incompleteness, when right-wing extremist, neo-Nazi, anti-Semitic and racist statements are becoming louder and louder in public discourse, especially in the social media, and are becoming more visible in the public sphere, Holocaust survivors can be admonishers who are (still!) listened to. What does it mean for individuals when exclusionary and inflammatory voices become socially accepted? And what does it mean for society as a whole?

More and more children and young people from various countries of origin are sitting in our school classes. Many of them or their ancestors have experienced discrimination, persecution and flight, or they themselves were perpetrators in a regime of injustice. For them, dealing with the accounts of people from the safe distance of history can be a stimulus and guide to question their own family narratives and to reflect on biographical fault lines as well as armed conflicts and social conflicts in their countries of origin and families.

History education must not be a mere place of remembrance, but rather a consciously designed, purposeful, content-oriented examination of memory. When memories are told, heard, questioned, contrasted and historically classified, the diffuse past fogs of the unspeakable, the unbelievable and the unheard cease to be ghosts and contribute to the development of a reflected historical consciousness.

Information on the author: Adelheid Schreilechner teaches at the Salzburg University of Education. She is the director of the university course “Holocaust. Cultures of Remembrance. History Education,” which is conducted in cooperation with _erinnern.at_.