How do we remember people no one asks about? Where there are few sources and no narratives, forgetting lurks. This article traces the biography of one of these people.

A research by Maria Ecker-Angerer. Translated by Hilde Mayer.

For 20 years now, I have been talking to people about their experiences under National Socialism – primarily with those persecuted, but also with fellow travelers and perpetrators, and in recent years increasingly with the respective generation of children and grandchildren. Again and again I research my own family history – and then history becomes very personal for me. I would like to report on such research in the following. It is partly based on conversations with relatives. Italicized sentences and parts of sentences are taken from these conversations.

Grandma and her siblings

My grandmother Karoline, born in 1917, had three brothers: Heinrich, Johann and Friedrich. All of them were killed in the Second World War. I did not know them and yet I have a fairly clear picture of them in my mind. Their fates and photos were present in the family conversations of my childhood. About Heinrich, for example, it is said to this day that he was a passionate hunter who could shoot a goshawk in free flight. A hothead. Hans, on the other hand, is remembered as a very good man who was popular with everyone. Fritz, the youngest: our favorite. He was only 17 years old when he enlisted, and before he left he wanted his relatives to give him a farewell kiss.

I don’t remember when I realized that my grandmother also had a sister. Her name was Fanni. There is no photo of her and there are no family stories about her. For many years I have been trying to give my great aunt a more visible place in our family history by always doing research on her life. To my many questions I have (so far) found only a few answers. 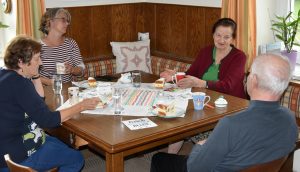 At a family reunion in August 2020, the author tried to find out more about her greataunt.(c) Jan Ecker

Written sources that could provide information about her life are few. They either do not exist or have not yet been found. The baptismal chronicle at least tells of her birth. In September 1919, Franziska Holl was born as the third of five children at Andrägut, a farm in the Hausruckviertel region of Upper Austria. In my conversations with relatives, I mostly encounter an openness in principle to talk about Fanni. But this is followed by vague statements that almost always carry a question mark. Franziska Holl suffered from a mental handicap. An illness shortly after birth, perhaps, which she survived, but just with permanent damage? I am not sure. I don’t even know if she went to school. Wasn’t she sometimes placed in a home for a few months in her childhood, I don’t know where. Her appearance? She had similarities to a well-known television presenter. I actually thought I had a photo of her, but I didn’t find one.

“Yes, but what was she like, Fanni, how can I imagine her?”, I ask at a family meeting called especially for this purpose. Fanni was quite a beauty, with dark, thick hair ǀ She liked to sit by the stairs and eat there ǀ She also liked us and was happy when we came ǀ We liked to do her good ǀ You couldn’t have a normal conversation with her. You couldn’t have involved her at all ǀ She also went to the stable to muck out. ǀ The children often sekked her when she picked fruit. ǀ She is very attached to her mother. These loose sentences are the yield of an entire afternoon. At the first opportunity, the conversation slips away, usually to the brothers, about whom there is much more to tell. Again and again, until I follow up.

“They wanted to take her somewhere”

Many years before this meeting, my grandfather had casually mentioned to me in a conversation quite shortly before his death that his sister-in-law Fanni had been forcibly sterilized by the Nazi authorities. Someone from the relatives had accompanied her, as she had not been able to go to the authorities herself. Who? When? Where exactly? I don’t remember anymore. More than 1,000 people were forcibly sterilized in the then Gau Oberdonau. This intervention had serious consequences for those affected. They struggled with the physical consequences, not to mention the emotional aftermath. Although the Nazi authorities meticulously documented the forced sterilizations, unfortunately only a few of these sources have survived. And so in the case of my great-aunt, too, there remain above all conjectures and many questions as to the course of events and the consequences.

Who? When? Where exactly? I don’t know anymore.

But once people had fallen into the clutches of the Nazi bureaucracy, they were threatened with further persecution, in the worst case with murder as part of the Nazi euthanasia actions. Franziska Holl lived on her parents’ farm and was not placed in a home. Did this save her from being murdered? How narrowly she may have escaped this fate can only be speculated. In any case, there are also vague hints about this: They wanted to take her somewhere, but she didn’t want that. They were imprisoned there, there has been something before, but I can’t really remember what happened.

My great aunt survived National Socialism. Nevertheless, she died an early death. She was 39 years old when she suffocated in a fire in her room on her parents’ farm one winter evening in the late 1950s. She was lying in the room inside. And she lit a candle because it was so cold. And something caught fire.

My grandmother was the only one of the five siblings who was still alive. She died in the early 1990s, even before my interest in our family history and the National Socialist era awakened. I do not have the impression that the life and fate of my great aunt was maliciously concealed. It was simply not talked about. The relatives I talked to remember Fanni with obvious affection, but they lack the words, the anecdotes told and embellished over and over again, to recount on demand. And so even persistent questioning resulted in disappointingly unproductive answers.

There was simply no talking about it.

This not-talking can be observed not only on a family level but also on a social one. In a post-war society that stylized itself as a victim, there was no place for the real victims. People who were forcibly sterilized under National Socialism were particularly exposed to silence and were not officially recognized as victims until very, very late. To this day, the topic of disability is shrouded in shame, even within families, which makes open conversations even more difficult.

And so words and stories are missing. And where words are missing, oblivion lurks. I will therefore not stop asking about Fanni.

But what about the people and the lives that no one asks about?

Information on the author: Maria Ecker-Angerer is a historian and psychotherapist in training under supervision.