Salzburg is one of many Austrian regions in which anti-Semitic codes were deeply rooted. Centuries of exile, an extremely small Jewish community and attention to Salzburg as a hot spot for tourism and high culture led to a brew of local and supra-regional anti-Semitism.
A text by Albert Lichtblau (translated by Bettina Reiter)

There are two stories that always come to my mind when someone asks me about the history of anti-Semitism in Salzburg. One comes from an interview with Irene Fürst, born in 1897, who lived with her husband and children in the Linzergasse (a popular shopping street in Salzburg city centre) until 1938. There she ran a business that was destroyed in the November pogrom. Her husband, like many other Jewish men, was deported to the Dachau concentration camp. She was a strong woman, and the other women met to discuss what they could do to free their men. The only chance back then was to leave the country immediately. Irene Fürst and her family managed to escape to the United States. She would never step on Austrian soil again. She never stopped thinking about Salzburg, though. Every evening she would imagine herself walking through Linzergasse. When she lived there, she never wanted to go on vacation. What for? “I loved it. It was such a nice city. Without the people of Salzburg, Salzburg would be the most beautiful city in the world.” This quote was taken up by the then Federal President Thomas Klestil at the 100th anniversary of the synagogue in Salzburg in 2001. What a bitter, sad and oppressive résumé of a persecution story that is. 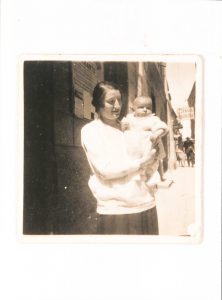 The other story comes from the memories “Als wär’s ein Stück von mir” by Carl Zuckmayer, who emigrated from Nazi Germany to Henndorf am Wallersee in 1933. A forest farmer he knew suspected that Chancellor Schuschnigg was a Jew because the Nazis scolded him so much. Zuckmayer reassured the farmer that Schuschnigg was not a Jew. “But then he continued to ponder: ‘Are the Jews really that bad?’” Zuckmayer tried to calm the peasant again to which the forest farmer replied, “Once,” he said thoughtfully, “Just once I want to see a Jew.” This sentence says a lot, namely that people’s thoughts were shaped by fairy-tale-like fantasies about how much power the “bad guys”, the Jews, allegedly had and how dangerous they were. The question Zuckmayer was asked by the farmer is a key to understand the confused perception of the “Jewish question” before the Nazi era: there were hardly any Jews in the county of Salzburg. At the 1934 population census, only 198 people of Jewish faith lived in the city of Salzburg and only 41 in the rest of Salzburg county.

A long history of anti-Semitism
In Salzburg (and many other Austrian provinces), the ideas about Jews were mainly characterized by terrifying fantasies and hardly by real experiences. The anti-Semitic spitefulness was usually already part of religious education at school, repeated in sermons in church, it was the talk in bars and of course, the increasingly radical and successful racist Nazis could promise to be the ones who would finally “clean up”. “Cleaning up” was a key topos of anti-Semitic populism and meant the expulsion of Jewish people. The negative attitude towards Jews in Salzburg also had to do with the fact that in 1498 Prince Archbishop Leonhard von Keutschach had the Jewish population “hunted in the whole county”. Up to Mozart’s time, a mocking “Judensau” was emblazoned at Salzburg city hall.
Only in 1867, an Austrian law ended these restrictions. There was little time to build a Jewish community until 1938, but the small group managed to establish a Jewish cemetery in Aigen (a borough of Salzburg), build a synagogue, employ a rabbi, and found an independent Jewish community. 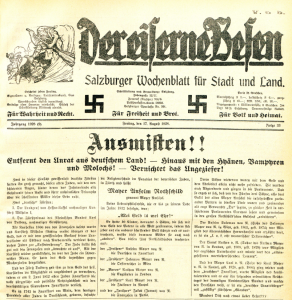 Like in many other Austrian counties, German-national conservative anti-Semitic forces dominated in the county of Salzburg. Salzburg’s geographic proximity to Germany played a significant role in the 1930s with the rise of the NSDAP. Even before that the city had the most radical anti-Semitic newspaper in Austria, the anti-Semitic leaflet “Der Eiserne Besen”, which resembled in its tasteless radicalism the NSDAP leaflet “Der Stürmer”. This included lists of all businesses run by Jews in a “Judenkataster”. Of course, hateful anti-Semitic texts against the Salzburg Festival were part of the repertoire of “Der Eiserne Besen”. For the hate sheet the festival was a “monkey theater”, a “Jewish Eldorado”. At times, the situation could get quite paradox: Many well-known businesses such as the traditional costume shop Lanz regularly advertised in “Der Eiserne Besen”; at the same time, Jewish customers bought clothes in exactly this shop in the summer months.

“Judenfreie” leisure activities
Hiking, alpinism and summer retreats became an important economic factor. Since the small state of Austria had with Vienna only one metropolis after the collapse of the Habsburg monarchy, the up-and-coming tourism industry concentrated on the Viennese looking for relaxation and balance. More than 90 percent of all Jews in Austria lived in Vienna – they made up about 10 percent of the capital’s total population. The fight for spaces of leisure and nature became an anti-Semitic playground. The mostly racist anti-Semites managed to exclude Jews with so-called “Arierparagraphen” which were implemented in the bylaws of important associations. Great examples for this were the Alpine Club and the Austrian Skiing Association in the 1920s. One side note: While the Alpine Club tried to work through its history in this regard, such efforts are completely lacking in the Austrian Skiing Association, as a recently completed dissertation by Andreas Praher shows. The Sepp Bradl Stadion at the foot of the ski-jump hill in Bischofshofen is an indication of a lack of historical awareness, since “Bubi Bradl”, as he was affectionately called, was a superstar of NS sports (world champion in 1939), a member of the illegal SA even before the “Anschluss” and later a prominent figure in the military training of the Hitler Youth.

The summer retreats were also anti-Semitic fighting spaces, in which it was about creating social distance and excluding Jewish summer guests. Anti-Semites were successful in a few communities, as the history of the composer Arnold Schönberg shows. Exasperated, he stopped his summer stay in Mattsee in 1921 when the guests were asked to prove that they were not Jewish. Other Salzburg municipalities with similar resolutions were Mittersill, St. Johann im Pongau or Tamsweg.

What? I, in the summer season a Nazi?

Nevertheless: The Salzkammergut (in county Upper Austria and county Salzburg) also became a popular recreation area for Jewish guests from Vienna. How this went together with an anti-Semitic local population remains a mystery. The economic constraints were presumably more important because the Jewish and non-Jewish guests brought money from the city and created work. A joke from Salcia Landmann’s collection provides an insight into this conflict: a hotel guest learns that the landlord is a Nazi, and the landlord replies indignantly, “What? I, in the summer season a Nazi?“ Probably both sides arranged themselves, because who on the Jewish side should want to know that someone was anti-Semitic? The issue could drive those affected mad anyway.

Radicalization in 1938
With the “Anschluss” in March 1938, the Jewish population of Austria was shocked to find out how many were actually deeply anti-Semitic and supporters of the Nazis. Now the racist exclusion game could show its brutal malice. The scramble for the best pieces of Jewish property brought Nazi nepotism to its limits, because there was not that much to distribute outside of Vienna. Formerly illegal Nazis declared how much they had done for the NSDAP before the “Anschluss” and how much they had suffered from being politically persecuted. They deduced that they were entitled to Jewish property as compensation. Those who did not get anything continued the victim story. Whoever got some Jewish property – as always relationships within the party helped – did everything to assert that the “aryanized” property was worthless and junk. In the past, there were fantasies of incredible Jewish wealth but then, all of a sudden everything had to appear worthless in order to be able to take as much as possible. 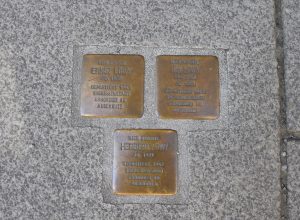 The rest of the story is known: the “expropriations” were one of many steps towards impoverishment and exclusion, violence hardly met with resistance and increased the pressure of displacement. Those who could not escape in time had to expect murder. The exemplary Stolperstein project shows how high the number of victims is with detailed biographical information about the fate of those who died.

Dealing with the past
The fact that Salzburg became a centre of emigration for Jewish survivors from Europe after the end of the war and that Jewish life in the city and province of Salzburg temporarily pulsated is an irony of history, which Alpine Peace Crossing regularly commemorates. The Salzburg Jewish Community and the synagogue were reactivated. The president of the cultural community Marko Feingold was “the community” for decades and was its mouthpiece until his death in 2019. Despite many efforts, the community was unable to recover, remained very small and has suffered from aging and a lack of offspring for decades.

I just couldn’t do it, I was afraid that I could kill someone. I closed the curtain and never opened it again.

The city and county of Salzburg became important destinations for survivors when they visited Austria. There is a phenomenon specific to Austria: Many approached the former place of residence Vienna, where the overwhelming majority had lived, after some time in the countryside. Vienna was full of “ghosts” of the past, the places reminded of perpetrators and victims of persecution, relatives and acquaintances who had been murdered. The province, however, including Salzburg, was not burdened by it and so they could enjoy what they missed most: the Alps with the special light and smell, the heavy constant rain, the Austrian food, especially black bread and pastries, as well as the familiar rural dialects that did not remind them of the guileful Viennese dialect. Since I was able to get to know and interview many survivors, often together with Helga Embacher, there were always encounters with a group of people in the summer, for example in the Gastein Valley with the feminist US historian Gerda Lerner from Vienna. Every year I was happy to see several families from Montevideo who stayed in the country. We met for coffee and cake every year in Café Tomaselli, discussed Thomas Bernhard, Elfriede Jelinek and the Austrian politics of Waldheim. When the ÖVP formed a government coalition with the FPÖ, this was over. Only one of these families came to visit from Montevideo.

It was different for survivors who had lived in Salzburg because they knew exactly what had happened here in Salzburg. Irene Fürst visited Europe after the end of World War II, but never Salzburg, “I just couldn’t do it, I was afraid that I could kill someone. I closed the curtain and never opened it again.”