The Alpine Peace Crossing Association (since 2019 Verein für aktive Gedenk- und Erinnerungskultur – APC) dedicated since its inception to the memory of people who have fled. For this purpose, the Hain der Flucht was created in collaboration with the Hohe Tauern National Park. An alpine meadow at 1750m altitude in the Krimml Achen Valley was chosen as the site, just before the ascent to the Windbachalm. The dedication of the grove took place on October 17, 2017 to commemorate the founding of APC 10 years earlier and the Jewish exodus 70 years ago.

An article by Caroline Huber

In 1947, the mountain guide Viktor Knopf accompanied Jewish refugees over the very meadow where the Hain der Flucht was later installed. It is located only about 200m from the 4th Peace Pyramid. The grove consists of a total of 49 trees dedicated to various personalities. Those fates which are inseparably connected with the former camp Givat Avoda in Saalfelden or with the Jewish Exodus of 1947 over the Krimmler Tauern. Other trees are dedicated to people who contributed to the founding of APC – and the revival of the escape route. Furthermore, two large natural stones have been installed, dedicated to people involved in the issues of flight and peace. No names of the honored people are listed with the individual stones and trees, but they are mentioned individually with their biographies on the website of the Hain der Flucht and are continuously added. 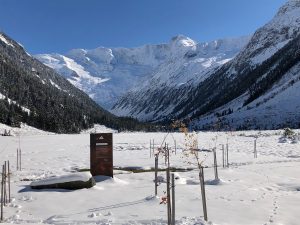 The Grove of Flight

APC is particularly interested in the trees of the honored contemporary witnesses of the camp Givat Avoda and the escape over the Krimml Tauern, as well as their descendants. In the coming time we would like to pay special attention to the further elaboration of the biographies. Narratives and life stories by and about contemporary witnesses give a face to stories, numbers and dates, make them tangible and create empathy. The second issue of Alpendistel is dedicated to the topic of “memories”. Therefore, we would like to tell two stories here of people who fled across the Krimml Tauern in 1947 at a very young age, and to whom a tree in the Grove of Flight is dedicated.

Narratives and life stories by and about contemporary witnesses give a face to stories, figures and data, make them tangible and create empathy.

Born in 1927 in Kaunas, Lithuania, Zwi Katz grew up in a middle-class Jewish family. In the summer of 1941, he was imprisoned in the Kaunas ghetto after the Wehrmacht invaded Lithuania. In 1944 he was deported to Kaufering concentration camp and later to Dachau concentration camp. When he was driven by the SS toward the Alps in 1945 in the course of a death march from Dachau, the U.S. Army freed him in Waakirchen in Upper Bavaria. What followed was an odyssey through Europe that lasted several years. The way led him over the Krimml Tauern Pass from Salzburg to Italy. Via the Mediterranean Sea he reached Israel in 1948, where he started a family and worked in the Ministry of Agriculture. Since the 1980s, Zwi Katz has been intensively dealing with his past. He speaks as a contemporary witness at schools in Germany and Israel. He is also a regular participant in commemorative events and for many years was vice chairman of the Association of Survivors of the Dachau Landsberg/Kaufering Concentration Camp Subcamps. In 2017, at the age of 90, he was the guest of honor at an APC event in Tel Aviv.

Dvora Levin was only a few months old when her parents decided to leave Poland and start the journey south. After entering Austria via what was then Czechoslovakia, they spent a few days in the Joint Camp in the town of Steyr. They crossed the Alps and reached Italy, where they were housed with dozens of other families in the area of Milan in a camp for displaced persons. Their father worked in the camp as an administrator and, because he was a well-known table tennis player, received offers to emigrate to Canada or Australia. However, he rejected these in favor of immigrating to Israel. Later, the family moved to Baretta, southern Italy. In total, they spent two and a half years in Italy before continuing on to Bari and from there by ship to Israel, where they arrived in June 1949. Dvora Levin participated in the Alpine Peace Crossing for the first time in 2017, treading the path she used to escape with her parents 71 years earlier.

For more information, biographies and ways to support the Grove of Flight, visit: www.hain-der-flucht.at

Information on the author: Caroline Huber is an educator and APC board member.