Reflections on representations of survivors and on the end of living contemporary witnesses are currently in vogue. Through exemplary readings, this article shows that reflections on the limits, forms, and possibilities of witnessing and conveying what happened are as old as writing about the Shoah itself.

A contribution by Marianne Windsperger

For decades, numerous publications, exhibitions, projects, and public discussions have addressed the end of living eyewitnesses. In 2019/2020, for example, an exhibition on oral history projects at the Jewish Museum Hohenems entitled “The End of Contemporary Witnessing?” asked what remains of the century of contemporary witnesses. What complex relationship histories between interviewers and interviewees, medium, society, and culture of remembrance are traced by the numerous attempts to capture the voices of survivors, and how have these constellations changed in the decades after the Shoah?

This reflection on the end of contemporary witnessing and the accompanying transformations of the survivors’ narratives, mediated experiences, and experiences have certainly gained relevance, but are by no means new, but as old as writing about and documenting the Shoah itself.

In a Yiddish document bearing the location of the Auschwitz concentration camp and the year 1945 as spatio-temporal coordinates, and drawn by Abraham Levite, it already states:

“Every cultured and decent person will feel obliged to pity us and to deliver eulogies. When our shadows appear on screens and stages, high hearted ladies will wipe their eyes with perfumed cloths and lament us: alas, the unfortunate.”

Every cultured and decent person will feel obliged to commiserate with us and deliver eulogies.” Abraham Levite

In this preface to a planned Auschwitz anthology – housed in the YIVO Archives – Abraham Levite speaks of remembering without survivors. In his perception from the immediate events, the voices of the Jewish victims have been silenced, giving way to a superficial, sentimental, and ritualized remembering. Bitter and full of irony, by 1945 the author is already looking at a post-Shoah world in which the suffering of the people in the camps is mediated through media such as films and theater and is hardly different from other tragic productions. Levite imagines a time in which the authority of the survivors as a narrative instance does not exist and the concrete events of the Shoah have been transformed into cathartic cinematic moments. In the disturbing juxtaposition of a cry for help, a testament, an indictment, and a call to write, to document life and to imagine an afterlife, Levite’s text resembles other very early testimonies, often with a long path of transmission and mediation behind them, preserved in fragments and now dispersed among various archives . Looking at the often fragmentary testimonies and memoirs in numerous languages and writing systems, the literary scholar Mona Körte notes that “apart from the Shoah, probably no other event […] has prompted people in such large numbers to describe their survival, to record their memories of it” and emphasizes that this writing must be seen as a broad phenomenon, as a writing up of the laity. This broad phenomenon of collecting and recording is addressed by historian Laura Jockusch in her book Collect and Record! Jewish Holocaust Documentation in Early Postwar Europe (2012). Those early attempts at writing by Jewish survivors in the first years after World War II were often initiated and collected by Jewish historical commissions and documentation centers; many of these first testimonies originated in the Displaced Persons Camps and were written in Yiddish.  With their often very explicit language, the appellative structure, but also through numerous literary references, they can throw new perspectives on the canon of Holocaust literature and also pose new questions for historical scholarship about forms of narration and documentation.

The Childish Memory and the Beginning of Holocaust Literature

While for Abraham Levite a world in which the voices of survivors are heard is unimaginable in 1945, Aharon Appelfeld’s literary worlds are populated almost exclusively by people who embody flight, expulsion, and camp experiences.

“As long as the survivors were among us, the Holocaust moved from the sphere of the unbelievable to the sphere of the visible. If someone didn’t want to believe what people could do to each other and to what level of barbarism they could sink, the survivor was there to tell it,” Aharon Appelfeld said.

“When someone didn’t want to believe what people do to each other and to what level of barbarism they can sink, the survivor was there and told.” Aharon Appelfeld

The author Aharon Appelfeld, who was born near Czernowitz in 1932 and died in Petach Tikva in 2018, survived the Second World War as a child and arrived in Palestine in 1946. In an essay published in 2005, Childhood in the Holocaust, and in his autobiographical text History of a Life (1999), he examines the transitions from documenting what happened to imagining and shaping memory in literary texts. With a view to his own writing – 46 novels and numerous stories have been published in Hebrew – and to that of his contemporaries such as Imré Kertész and Elie Wiesel, he emphasizes the special features of this early experience and sees the testimonies of the former children as the foundation of Holocaust literature. According to Appelfeld, the central characteristics of this “literature of wisdom” are the description of deep, physical experiences and the search for orientation on a level that is not geographic-spatial, but rather through interaction and the precise observation of human actions.

“The testimonies of the former children are of a very different kind, because the children did not absorb the horror in full, but only to the extent that they could cope with it as children. Children lack a sense of temporal distance, and they cannot compare what they experience to a past. The adult survivor possessed memories of the time before the war, but for the children the Holocaust was present, their childhood and youth. They did not know another childhood, happiness.”

The voices of these children had not been considered testimonies for a long time because their narratives thwarted and irritated the adult survivors’ attempts at documentation, which focused on facts, names, and places. Their texts offer truths other than the mere coordinates of what happened, focus on reflection on their experiences and the fabrication of their own memories, and return again and again in their writing to key experiences in childhood. For many of these survivor-writers, their experiences during the Shoah thus become the starting point of their literary work itself.

In addition to his explicitly autobiographical experiences, Aharon Appelfeld lets readers discover a broad spectrum of life and survival paths in his novels; his writing is also referred to in research as “expanded autobiographical self. The protagonists Tzili, Katerina, Paul, Edmund, Bruno, Jakob, Hugo, Blanka, and Erwin are encountered in the fairytale-sounding villages of Bukovina, in the alleys of Czernowitz, in camps and on escape routes across Europe, as well as in coffee houses and on the beach in Tel Aviv. In condensed form, Appelfeld’s places become microcosms of survival and continuation of life; in the story Nacht für Nacht (Night by Night, 2001), for example, Appelfeld describes life in a Jerusalem boarding house inhabited exclusively by survivors. Every evening the residents gather, drink together, play cards, and are haunted in their dreams by the ghosts of the past. The common experience of persecution often acts as a dividing line between the protagonists, and so there are repeated outbreaks of violence. The Yiddish language, melodies and books, which refer to a world before the Shoah, act as a unifying element. This story was filmed in 2015 by Tamar Yarom under the title “The Pracht Inn”. 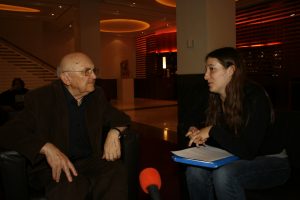 The author in conversation with Aharon Appelfeld in 2007

In addition to the numerous texts by survivors, fictional portrayals of survivors and contemporary witnesses in films and literature, the figure of the contemporary witness has also become the central protagonist of the official culture of commemoration. The ceremonial commemoration in parliament or at Heldenplatz on the anniversaries of the liberation and the November pogroms is hardly conceivable without the public speech of contemporary witnesses. In the course of these celebrations, the speech and physical presence of survivors of the Shoah plays a central role; they are called upon to testify on behalf of a group of people with similar experiences and to convey their experiences to a broad audience. As a figure on the stage of the memorial theater, survivors no longer represent only individual experiences, but embody the experiences of persecution of a certain group of people, are confronted with the expectations of the public and are pressed into certain templates.

The play “Die letzten Zeugen” (The Last Witnesses) by Doron Rabinovici and Matthias Hartmann, which premiered at Vienna’s Burgtheater in October 2013 on the occasion of the 75th anniversary of the November Pogrom, took the gradual disappearance of contemporary witnesses as an opportunity to stage the transition from direct communication with the survivors to a transmission of experiences tied to various media.  Lucia Heilman, Vilma Neuwirth (deceased 2016), Suzanne-Lucienne Rabinovici (deceased 2019), Marko Feingold (deceased 2019), Rudolf Gelbard (deceased 2018), Ari Rath (deceased 2017)-the chair of Ceija Stojka remained empty, she had already died before the premiere in 2013. Actors staged the writing of diaries and memoirs by transcribing autobiographical texts of the survivors, and read from memoirs of the protagonists. The last witnesses were present on stage for the entire duration of the play, as if their physical presence itself was to move what had happened “into the sphere of the visible.” The screen between the audience and the survivors was lifted at the end of the play, and the witnesses addressed the audience with a personal statement. After the end of the living eyewitnesses, it is all the more important to discover the individual voices and lives of those people who survived the Shoah in the numerous published and the many still unknown texts, and this article is also intended as an invitation to do so.

Information on the author: Marianne Windsperger is a research associate at the Vienna Wiesenthal Institute for Holocaust Studies (VWI).