When the Jewish survivors met Hebrew-speaking soldiers in uniforms, with the patch of the David Star on their arms, and above it another patch of the Jewish Brigade, their hope was restored. These soldiers gave them food and shelter, they led them across mountains and borders as part of the Bricha movement. Here is the story of these soldiers.

An article by Rami Litani

My name is Rami Litani. I am an Israeli, born in Israel, just like my parents (even though the country then was still called Palestine), and I grew up learning about the creation of the Israeli state from them. My father, Eliyahu Litani (Alterman), was a company sergeant major in the first battalion of the Jewish Brigade. I took it upon myself to study their story, to collect relevant material, such as pictures, documents, letters and medals; to find their descendants and to urge them to look for what their parents left behind – their brave and heroic story. I am an active member of the Habricha Association. 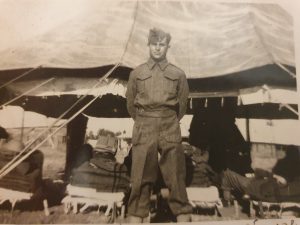 The Jewish Brigade was formed by the British late within the Second World War, in September 1944.The idea of having a brigade from Palestine actually began quite early and Jewish soldiers volunteered to the British Army already in 1939. It took that long because of Arab pressure that opposed the idea. The Jewish Brigade included more than 5,000 Jewish volunteers living in Palestine and was the only independent national Jewish unit to serve in WWII. The Jewish Brigade soldiers wore a very symbolic arm patch – its colours were the Zionist flag of blue, white and blue stripes and a yellow Star of David. Under the leadership of Brigadier Ernest F. Benjamin, they were shipped to Italy in October 1944, and took part in the battle for the liberation of Italy against the Nazis at the Senio River front, south of Venice, in the winter of 1945. 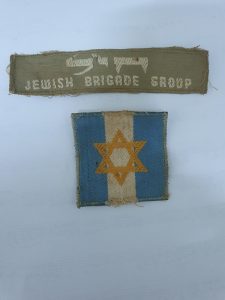 Following the end of the war, stationed in northern Italy and later in Belgium and the Netherlands, the soldiers of the Jewish Brigade facilitated the illegal immigration of Holocaust survivors to Mandatory Palestine, known as the Bricha. They did it under the cover of what they called by its initials TTG, Tilhas Tizi Gesheften, translated as “kiss my ass business”. They supplied the survivors with food, blankets, clothes, and petrol. Taking advantage of the chaotic situation in post-war Europe, they moved Holocaust survivors between countries and across borders. For many Jewish soldiers, this new mission justified their previous service in the British forces that had preceded the creation of the Jewish Brigade.

Taking advantage of the chaotic situation in post-war Europe, they moved Holocaust survivors between countries and across borders.

My father, who as aforementioned was a company sergeant major in the 1st battalion of the Jewish Brigade, described in a very emotional letter to his parents, his meeting with the survivors.

The brigadier gave an order for the first car of the convoy to wave the blue and white national flag. Imagine the flag at the head of such a large procession of cars – mostly armed Jews on their way to Western Europe via Germany. This is how we traveled in Austrian territory. On our way we met some Jews who stood in the streets and shouted “Shalom Shalom” etc. And a few more Hebrew words to show us that they are Jews. I should mention here that those Jews who were previously afraid of openly being Jews, are now wearing a large Star of David on their neck and they feel strong and safe. We can not stop and we continue.

Tuesday. This day left a great impression on me. At noon, we see  a crowd on the road waving their hands. We were not used to it, because we are finally in enemy territory and the Star of David on all the cars stands for glory. We got closer and there’s a young man jumping into my car speaking Hebrew. I asked him what the matter was, and he said that a few more kilometers from the place, in Landsberg, there is a large refugee camp of Jews, and since they knew we were coming, they came to meet us. We drove on and reached the camp area.The refugees stood on the road, singing Hebrew songs and wanting us to drive through their camp. The commander of the convoy, an English colonel, agreed and there were signs saying “Welcome”, “Long live the Brigade” and on the sides of the road there were Jews. They were alive and enthusiastic. Only a few weeks ago they were living dead“ 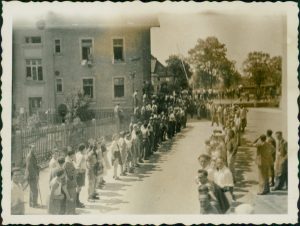 Several Jewish Brigade soldiers stayed in Europe after the Brigade was disassembled,  using false identities, and were of great importance in the Bricha movement and the illegal immigration movement. Due to their military experience the soldiers of the Jewish Brigade, and the others who joined the British Army played a significant role in the young Israeli Army.

The Jewish Brigade Story and me

Nowadays, the story of the Jewish Brigade has been forgotten and is quite unknown. Most of the soldiers have already passed away. This is why I have been working tirelessly over the last years to document the brigade members’ stories with the help of  their books, letters and memoirs, and their children, who themselves are now pensioners. It is quite challenging as most of the people have changed their names from European names to Hebrew names, women got married and have other names etc. With the help of an Israeli Radio Station and a variety of other initiatives, I have been able to put together a group of 500 people who are connected to the brigade through their families. I give a lot of lectures telling people about the Brigade and the Bricha, and after these lectures, people tell me stories, send me pictures, documents, diaries and letters. I have founded a facebook group which deals with the Brigade. The members are mostly of the second or third generation. It is hard work, but it is invigorating and the positive feedback from people has been inspiring.

Information on the author: Rami Latini is an active member of the Bricha Heritage Association and son of a company sergeant major in the Jewish Brigade during World War II.