Anti-Semitism in soccer is a phenomenon that is not new, but has long been downplayed as a problem in its own right and is constantly adapting to new social conditions.

An analysis by Florian Schubert (Translated by Hilde Mayer)

In the Europa League qualifying match between Eintracht Frankfurt and Racing Strasbourg at the end of August 2019, the referee received anti-Semitic insults from individual spectators. One spectator was expelled from the stadium at halftime for making anti-Semitic remarks. After the match, a member of the Central Council of Jews in Germany who was present in the stadium reported that he was particularly shocked by the inaction and silence of the surrounding spectators. No one had intervened. It was only during the break that a perpetrator was asked to leave the stadium after the stewards had been informed of the incident. What is clear from this incident is that anti-Semitism is a problem in soccer, and secondly, that it sometimes occurs very freely.

Soccer is a social event followed by a large number of people. For many people, being a fan in a stadium means being in a place where they can give free rein to their feelings without being reprimanded. In the stadium, community processes are created, also through self-assurance in distinction to opposing fans.

An immanent part of fan culture is belittling opposing fans and provoking each other. This also takes place in forms that are not always meant to be taken seriously. The forms of discrimination known from society are used. The boundaries of socially accepted behavior are often transgressed in soccer fan culture: Fans, even those who do not resort to discriminatory invective in their everyday communication and/or would even describe themselves as enlightened people, sometimes use sexist, homophobic, racist, anti-Semitic, anti-gypsy, anti-disability or otherwise discriminatory communication at soccer. This behavior is met with tolerance and support from other fans in the stadium. The resulting shared experience of demarcation from the opposition creates a supportive community of values. Without this group-building quality, soccer would probably not be as attractive to many fans.

At an away game, a fan dressed as an Orthodox Jew was driven through the city. 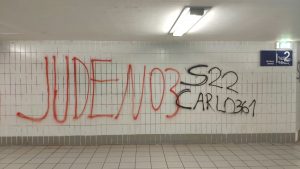 Anti-Semitic invective is also part of the „culture of discrimination“ against opposing fans, players and clubs portrayed as „foreign“ and „different.“ Through anti-Semitic statements, one’s own position is upgraded and that of the opponent devalued. This was demonstrated abundantly clear, for example, by hundreds of FC Luzern fans on February 22, 2015, when they drove a fan dressed as an Orthodox Jew with an FC St. Gallen sash around his neck through the city at an away game in St. Gallen and played this down as carnival fun. In May 2017, after the „small“ derby between the amateur teams of Rapid and Austria Wien, fans of Rapid Wien shouted „Jew pigs“ in the direction of the opponent and its fans. Demonstratively expressed anti-Semitism is considered one of the highest devaluations in soccer and can be observed repeatedly over the past 100 years.

Acting out anti-Semitism in soccer

Anti-Semitic acts in soccer make use of various anti-Semitic stereotypes. While in the 1980s and 1990s it was mainly anti-Semitic invective against referees, the opposing team and its fans, in the summer of 2014 it was possible to observe how soccer fans positioned themselves anti-Semitically against Israel against the backdrop of the military clashes in the Gaza Strip. In July 2014, in Austria, shortly before the end of the friendly match between the French team OSC Lille and the Israeli team Maccabi Haifa, pro-Palestinian fans carrying Palestinian flags stormed the pitch and physically attacked Maccabi players. The match was abandoned and another planned test match between SC Paderborn and Maccabi Haifa was initially canceled for security reasons.

Social moods are reflected in the stadium

Unfortunately, such incidents should not come as a surprise. Soccer is not – even if it is often presented and perceived in this way – a parallel world. Social moods are reflected in the stadium. The situation in the stadium described at the beginning, in which no one intervened, favors discriminatory behavior by fans.

The repertoire of anti-Semitic songs also repeatedly refers positively to National Socialism and the Shoah. For example, the opponent is repeatedly wished transport to Auschwitz in songs. In addition to songs and chants, anti-Semitism is also expressed on banners, through murals and with stickers.Acting out anti-Semitism in soccer

In 2017, stickers with the likeness of Anne Frank in a Schalke 04 jersey appeared in Germany. These stickers are to be understood as a devaluation of the club and make a clear reference to the Shoah under National Socialism.

In Germany, anti-Semitically motivated physical violence has so far actually been observed „only“ against players of clubs of the Jewish gymnastics and sports association Makkabi Deutschland e.V., which was newly founded in Germany in 1965. This is comparable to the situation of SC Hakoah Vienna. Insults like „Shit Jew“ or „They forgot to gas you“ affect all players of these clubs. No matter whether they are of Jewish faith or not. It is clear that the anti-Semitic invective is far from being voiced only by neo-Nazi fans of the opposing teams. Anti-Semitism is also openly expressed by opposing players, club supporters and officials. For example, on September 6, 2015, in Cologne, after the end of the game between TuS Makkabi Köln and ESV Olympia, opposing players attacked Makkabi players with shouts of „Shit Jews“ and „Free Palestine.“ Interviews point out that anti-Semitic attacks and hostility increase especially „when the situation in the Middle East is heated.“ „We are seen as an Israeli team. There are opponents who see the Star of David on our jersey and think they are playing against Israel.“

In addition, Maccabi is repeatedly accused by association officials and clubs of (exploiting) its persecution under National Socialism to place itself in a victim role as a Jewish sports association in order to gain an advantage. This reveals a secondary anti-Semitism. Maccabi are accused of not wanting to draw a line under the Holocaust and of continuing to insist that they have a right to favorable treatment because of the Holocaust. The underlying position in the associations is that „there has to be an end“.

Criticism of Modernity as a Gateway for Anti-Semitism in Football

Historically, anti-Semitism in the 19th century has also fed on criticism of modernity. In soccer, this critique appears in the form of a massive rejection of the capitalist transformation and transformation of soccer leagues, which is combined with a romanticizing image of the past of a supposedly proletarian soccer. The slogan „Wider den modernen Fußball“ („Against modern soccer“), which is held aloft by some fans, is an example of this. Anti-Semitism is adapted to current conditions here, for example, in that anti-Semitically simplified critiques of capitalism (also) influence explanatory patterns in discussions about commercialization in soccer. Furthermore, terms are used that can also serve anti-Semitic stereotypes. For example, when discussions about commercialization in soccer refer to „speculators“ or „financial sharks“ who are opposed by the „honest“ club bosses and board members, this can point to an anti-Semitic connotation. 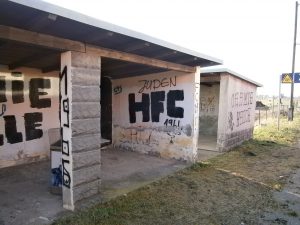 The reproduction of anti-Semitism in soccer always serves to test what is permissible in soccer, but also how society reacts to the incidents. Anti-Semitic fans are well aware of the explosive nature of their actions; they perceive themselves and their actions as being observed through a magnifying glass. For this reason alone, it is necessary to be sensitive to anti-Semitic incidents in soccer and to counter them resolutely. Unfortunately, this also raises the question of how serious and honest the actions of clubs and associations against anti-Semitism or discrimination in soccer are. For example, on Holocaust Remembrance Day in January 2020, at the start of the FC Bayern Munich vs. FC Schalke 04 match, both teams showed up together with a sign saying „#we remember.“ But the Bayern Munich team also wore a mourning flag in memory of the late club CEO and former Waffen-SS member and Oberscharführer Walter Fembeck. Fernbeck was also remembered with a minute’s silence. Such actions leave nevertheless very much at the seriousness in the fight against anti-Semitism doubt.

Unfortunately, anti-Semitism in soccer remains a problem. It is not only spread by right-wing soccer fans and neo-Nazis in soccer. In recent years, anti-Semitism in soccer has also been presented in different forms of expression. For example, it appears that the situation in the Middle East is having a greater impact on soccer, as evidenced by the violent incidents from the summer of 2014, than was previously the case. Such attacks could become more frequent again at any time if the situation in the Middle East becomes more acute.

Hostilities against Jewish players have also increased again. In general, it must be assumed that the current socio-political situation, in which anti-Semitism is once again very open, can contribute to an aggravation of the situation in soccer.

Information on the author: Florian Schubert is a political scientist, sports scientist and historian and works at a Hamburg district school