The memoirs of Austrian Jews who, decades after the National Socialist persecution and expulsion, gave testimony in the form of interviews or autobiographies, show a clear increase in antisemitic hostility in the 1920s and 1930s. Everyday anti-Semitism was particularly evident in schools, universities, and the immediate social environment.

An article by Victoria Kumar

Anti-Semitism in schools and universities

„Offences had become a routine. The term ‚Saujud‘ [filthy Jews] had become so common that one almost took it for granted. The insults, vulgarity and insolence we had to endure were beyond description.“ 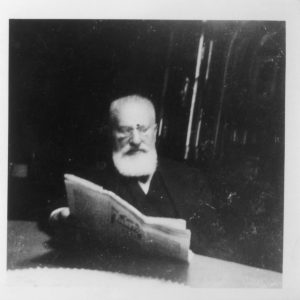 The biographical memoirs of David Herzog (1869-1946), the Rabbi of Graz, bear witness to a radical anti-Semitism in an extent hardly ever found in other biographical memoirs. Since his arrival in Graz in 1908, he saw himself exposed to hostility and insults in his functions as religious head of the religious community and as a professor and teacher. He described the universities and secondary schools as the „main places of anti-Semitism“ in the interwar period – studying was „a hard test and a thorny path“ for Jews due to the hostility that students experienced through teachers/professors.

„No sooner had we left school than the clamour started: ‚You filthy Jews!‘“

While anti-Semitism was already anchored in most political parties at the beginning of the First Austrian Republic, it increasingly affected the everyday life of the Jewish population in the 1920s. More and more associations and organizations prevented Jewish people from becoming members by statuary. Anti-Semitic verbal and physical attacks were particularly evident in schools and universities. Blanka Nachnieli (born in 1928 as Blanka Enis) described an incident in her educational environment as follows: „Yes, the school years! I enjoyed learning very, very much. The thing was only that we were a Jewish private school with very few children and next to us was the primary school with 300 Christian children. They were bullying us, ripped our school bags down, slapped us and in winter they always put snowballs in our coats and threw snowballs at us. As soon as we left school, the yelling started: ‚You bastard Jews!‘ and so on.“

Helmut Bader (1915-2002), on the other hand, did not remember any direct attacks against him, but recollected the following: „Anti-Semitism was becoming increasingly noticeable, although it was not directed against me personally in my class, since personal relationships, friendships and animosities had formed at that time. At the university in Graz, unlike in Vienna, there were not many anti-Semitic incidents. However, prior to the „Anschluss“, i.e. as long as Jews were still allowed to visit coffee houses, nightclubs etc., there were serious incidents almost every weekend, which began with anti-Semitic harassment and ended up in fights in which I was often involved“.

Helmut Bader’s registration form of the University of Vienna, 1933

Participation and approval, acceptance and indifference

Despite different perceptions, the reports of Jews persecuted and expelled by the National Socialists clearly show that anti-Semitism was already continuously present in Austria in the interwar period and manifested itself in various forms. In the interviews with Jewish survivors, which have increasingly been conducted since the 1990s, descriptions of anti-Semitic experiences are ever-present. As far as the period before 1938 is concerned, however, these were often only mentioned after specific questions were raised by the interviewers. The spectrum of experience ranged – as can be seen from the above interview passages – from verbal hostility, social exclusion to physical attacks. In addition to active participation and approval, acceptance and indifference also appeared as patterns of behaviour of the non-Jewish population; protest or support, however, were rare.

Jehudith Hübner, for example, who in the interview particularly remembered a childhood experience, was more surprised by the concrete statement of a fellow student than by the indifference of the teacher: „In the elementary school in Pressgasse, I was the only Jewish child in the class for three years. … Next to me sat a very sweet girl with a pony and two braids, which I always helped learning. One day she arrived and said, ‘Is it true, what I heard, are you a Jew?‘ I said, ‘Yes.’ She said, ‘Jesus Christ, I can’t sit next to you.‘ I said, ‘Why not?‘ She said, ‘My father said all Jews are dirty dogs.‘ Then I went to the teacher and she said, ‚Well, if you don’t want to sit together, then don’t.'“ 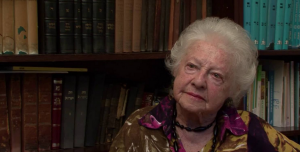 Jehudith Hübner during the interview in Jerusalem, 2009

Antisemitism in the 1930s

With about 180,000 women and men, the Jewish Community of Vienna had the largest number of members before the „Anschluss“ in Austria. About 1,700 Jews belonged to the IKG Graz, at that time the second largest Jewish community in Austria. The majority of the Jewish population living in Austria before 1938 did not live secluded from but with their non-Jewish surroundings. In the interviews, numerous interviewees describe the family’s self-image as „assimilated“ and „Austrian patriotic“, even if they were integrated into religious and/or cultural Jewish community life.

Various forms of anti-Semitism were taken for natural components of Austrian politics and society long before National Socialism. Although Jews were not openly discriminated against under the Austro-Fascist dictatorship, the state leadership largely tolerated the hostility towards Jews.

The Austrian patriotism of many Jews remained unbroken in most cases, even despite anti-Semitic experiences. After these experiences had become more frequent and more radical in the course of the interwar period, Jews also reacted by „moving closer together“ within the community, by emphasizing their Jewish identity and turning more strongly to Zionism. The Zionist youth associations (e.g. the „Blau-Weiß“ or the „Haschomer Hazair“), which were founded after the First World War, were of particular importance in this context, offering community activities and preparing for the aliyah (emigration to Palestine). „The Zionist youth movements developed in the style of the already existing German youth movements, such as the Wandervogel; they were also influenced by the English boy scouts. Their program attracted us especially because they offered young people opportunities for sports activities. What cannot be denied is the fact that we felt drawn to the Jewish youth movement in particular because of the latent anti-Semitism that was always present in Vienna“, wrote Teddy Kollek (1911-2007), who emigrated from Vienna to Palestine in 1935, in his memoirs.

„One had become nothing overnight.“

Fearing alienation from their social environment, parents often refused to allow their children to join a Zionist youth movement. They were also sceptical or even hostile to the preparation for aliyah promoted by the associations. The few – primarily young – Jews who (despite parental protest) made Aliyah in the 1930s often retrospectively cited experiences of anti-Semitism as a motive for emigration in addition to Zionist motives. „That my brother-in-law went to Palestine at that time, in the 1930s, we did not understand at all. We thought he was crazy. He was a partner in the company and his father even sent him to Paris to train as a tailor. He was a Zionist and pioneer, and the anti-Semitism that had spread throughout Europe also influenced his decision not to stay in Europe,“ Margaret Welisch (born in 1908 as Margarethe Loewy) remembered. She fled to the Philippines after the „Anschluss“. 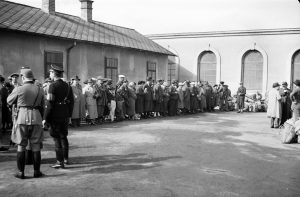 The emigration of Austrian Jews – to Palestine or to other countries – was generally kept within very narrow limits during the interwar period. If Jews had fled Austria before 1938, this was primarily for political reasons; for those persecuted as Social Democrats and Communists, possible destinations included Czechoslovakia or Spain. In view of the unofficial but latent anti-Semitism and the National Socialist threat inside and outside the Austrian state borders, Austrian emigration before 1938 can be described as „preventive escape“ (Anton Pelinka).

The radically anti-Semitic Nazi ideology was quickly and easily able to take roots in Austria after 1938 because the socio-political climate had clearly been racist and anti-Semitic before the „Anschluss“. However, the survivors interviewed had had no idea of the extent of the radicalized anti-Semitic violence of the National Socialists. As Laura Mokotov (born in 1921 as Laura Gertler) described in an interview, the exclusion and persecution of the Jewish population, which began as late as March 1938, affected all areas of life: „One had become nothing overnight. All that remained was the name Jew.“

Information on the author: Victoria Kumar is a historian and researcher at _erinnern.at_