October 14, 2020 marks the 10th anniversary of Paul Rieder’s passing. A tragic mountain accident ended his life and caused unimaginable grief. We from Alpine Peace Crossing and his friends from Saalfelden and his hometown Maria Alm want to remember him especially on this occasion.

Paul Rieder was an army and civilian mountain guide with heart and soul. From 1975 to 2010, he was active in the Wallnerkaserne Saalfelden and imparted his love of the mountains in an inimitable way to hundreds of people – especially the young ones who were entrusted to his care. He was also often and always there for people in need during disaster operations.

For APC he has a unique significance: he was the initiator whose knowledge of the „Krimmler Jewish Flight 1947“ led to the founding of Alpine Peace Crossing. 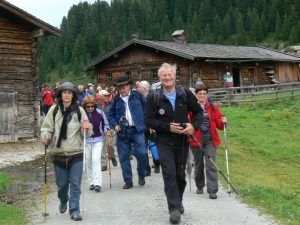 APC 2007: Paul Rieder with contemporary witnesses from Israel in the Krimmler Achen Valley

Without Paul Rieder, APC would never have come into being. He was also our mountain guide on the first commemorative hike over the Krimml Tauern, which APC organized in 2007 for and with contemporary witnesses and over 150 participants. He gave us the proverbial stone, which draws ever wider circles in the waters of remembrance, now already all over the world, as a symbol of empathy and hope for all refugees.

Erich Rohrmoser and Ernst Trybula for the Municipality of Saalfelden

Alois Gadenstätter and Hermann Rohrmoser for the municipality of Maria Alm