What is happening at the EU’s external borders is a human tragedy and reveals the hypocrisy of the European Union. The EU is one of the world’s largest exporters of weapons and wants to keep people fleeing from the same away from its borders by force. To do so, the EU also suspends human rights.

A synopsis by Matthias Schreckeis (Translated by Hilde Mayer)

After the expected failure of the „EU-Turkey deal“, the European Union was confronted with the arrival of thousands of refugees at an EU external border. This challenge was met with massive violence and the undermining of fundamental principles of the rule of law. The much-invoked „European solidarity“ was expressed in declarations of support with the Greek executives. The Austrian Turkish-Green government, for example, also sent a police unit to support its Greek colleagues, who posed martially in front of an armored vehicle.

The united European right-wing extremist and neo-Nazi scene also joined the ranks of the supporters. The latter mobilized in their networks to Greece to support the „defenders of Europe“. Austrian and German neo-Nazis also participated. Journalists and NGO workers were attacked and in some cases seriously injured as a result. Arson attacks on sea rescue ships are also known. 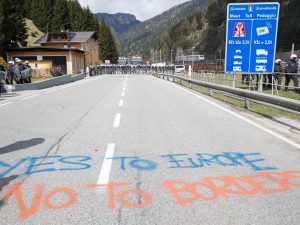 Scene at the Austrian-Italian border

The extent to which the public discourse on migration has already shifted to the right is shown by the alignment of the rhetoric of official European governments and the European far-right scene. War metaphors such as „defenders of Europe“ or „invaders“ have long been found not only among right-wing extremists, such as the neo-fascist „Identitarians,“ but are part of official government lines. The constructed threat scenario is underlined by the martial equipment of police units. Austria’s former interior minister, Herbert Kickl (FPÖ), called for „defending the border in the truest sense of the word“ in the daily newspaper Österreich in March 2020. The Greek government suspended the right of asylum for March altogether. The EU border agency Frontex is also supporting Greece with human and material resources in enforcing the EU border regime, although even stopping people from applying for asylum is criticized as being against human rights.

„This means defending the border in the truest sense of the word.“

The situation on Lesbos

The situation is particularly dramatic on the Greek islands, where there were also pogrom-like scenes when residents of the islands, together with right-wing extremists, prevented boats of refugees from docking and coming ashore. NGO employees were also threatened and in some cases injured. Cars and other infrastructure were also damaged. Here on the Greek island of Lesbos, not far from the Turkish mainland, the whole brutality of the border policy of the self-proclaimed „peace project“ EU is revealed. At the moment, about 18,000 refugees are stuck there in an EU camp that was originally planned for 3,000 people. The population, which has been left almost alone with this burden for years, reacted to the arrival of many more people in February with a general strike and demanded the expulsion of refugees. The aggressive racist sentiment of the local population is also a threat to refugees.

The Greek government has promised to bring 2,000 people from the hopelessly overcrowded camps to the Greek mainland. NGOs criticize that this is far from enough, especially in light of the COVID-19 pandemic. Repeatedly, the Greek government had asked EU member states for help in caring for the refugees. European solidarity in this case meant the deployment of highly militarized police units, as well as technical equipment to better monitor the border.

The situation in Bosnia

In Bosnia, too, refugees are exposed to great dangers: In Velika Kladuša, for example, there are reports and photos of mistreatment by Croatian police officers. They would take away valuables from apprehended fugitives and then send them back to Bosnia. The NGO SOS Balkanroute, which received the Ute-Bock-Award in May 2020, reports in interviews and articles about an increasing brutalization of police officers. They force refugees to undress and start the way back almost naked. There have also been markings by spray cans on the head. This serves to humiliate the fugitives, according to the organization. The Border-Violence Monitoring Network, an association of various NGOs that want to support refugees in the EU, documents assaults and human rights violations committed against refugees when crossing the border. For example, there is a report about a young man who had part of his ear bitten off by a police dog that was set on him.

The canton of Una/Sana, where thousands of refugees are staying, banned private NGOs from entering the camps in May 2020. International organizations provide only limited assistance, as the conditions in the improvised camps there do not meet their standards. Since May 22, owners have had to barricade vacant buildings under threat of punishment to make it impossible for refugees to spend the night in them. On a seven-kilometer-long and about a hundred-meter-wide strip, the Croatian police have cut down all trees to make crossing the border even more difficult, according to the humanitarian organization Team Vučjak. The reason given for the hunt for fugitives is to prevent the spread of the Coronavirus. 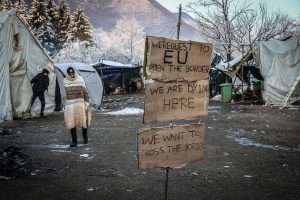 Cry for help from refugees in Bihać in December 2019. © Dirk Planert

Exacerbation of the situation due to COVID-19

The current COVID-19 pandemic represents an additional aggravation for the situation of people in the camps. The NGO Médecins Sans Frontières calls for an immediate and complete evacuation of the EU refugee camps on the Greek islands. The inadequate supply of clean water, hygiene items and medicines, as well as the cramped and overcrowded conditions in the camps, are ideal breeding grounds for the spread of the virus, the NGO said. Local people are also afraid, as can be heard in messages from those affected on the FilesfromMoria site.

Fatal in this situation is the lack of European solidarity. For example, the German government has suspended the so-called resettlement programs in response to the dangers of the corona virus. The original aim of these programs was to offer protection to „people in particular need of protection“ who have no possibility of returning to their country of origin or who are unable to establish a livelihood in their current place of residence.

In the current situation, it is most important not to forget that the inhumanities committed at the European external borders and in dealing with refugees are not normal and must not become so. Standing up and naming and criticizing the prevailing injustices is a necessary step. In concrete terms, this can put pressure on governments to act and save lives. The support of NGOs, which against all odds do invaluable work, also saves human lives. 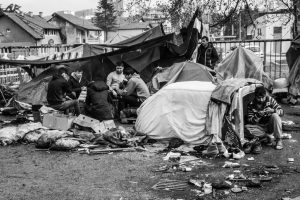 „The inhumanities are not normal and must not become so.“

The people sitting at the Turkish-Greek border, in Bosnia, or in detention pending deportation are human beings and therefore deserve humane treatment and protection. Melilla, Ceuta, Velika Kladuša, Moria, Calais, Fieberbrunn and many other names stand for the injustice and hypocrisy of the Nobel Peace Prize winner EU and the European states.

Information on the author: Matthias Schreckeis studies history and Slavic studies in Graz.

SOS Balkan Route advocates for a dignified life for refugees in southeastern Europe.

Emergency aid for refugees in Bosnia