– Marko Feingold (†) in Conversation with Michael Kerbler and Rudolf Leo

In the extensive conversation conducted by Michael Kerbler and Rudolf Leo at the turn of the year 2017/2018, Marko Feingold is interviewed about his two different roles in the period after 1945. On the one hand, the contemporary witness and, on the other hand, the co-organizer of the emigration movement of European Jews across the Krimml Tauern is interviewed. It was important to both, the journalist Kerbler and the historian Leo, to learn Feingold’s view on the geopolitical embedding of these events in 1947 as well as more about the Jewish actors, their motives and organizational structure. The meeting took place at Hanna and Marko Feingold’s home, which had the advantage that sometimes, when it came to dates or precise sequences of events, Hanna Feingold could helpfully stand in for her husband. 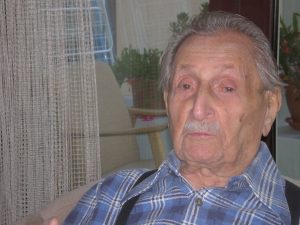 Mr. Feingold, in 1947 an organized exodus of several thousand Jews took place over the Krimml Tauern. When did this escape action begin, which led from the „Givat Avoda“ camp for „Displaced Persons“ in Saalfelden to Krimml and from there over the Tauern down into the South Tyrolean Ahrntal?

I can say that very precisely. That was in the summer of 1947, because by then we had brought transports to Italy via the French zone. The French let us go and didn’t bother, although the English repeatedly intervened with them that they should not let the transports through. But by then I had already brought 100,000 Jews to Italy.

But then it happened that in the early summer of 1947 the English felt that soon there would be a vote on Israel, on Palestine, … how shall I say … at the UN General Assembly in the USA, on Palestine, namely whether to create the Jewish state or not. The English were against it and did not want to have Jews in Palestine. So they wanted to stop the influx.

You are referring to the vote of the UN General Assembly in New York on November 27, 1947.

The route over the Krimml Tauern was one of three routes that led from Europe to Palestine at that time. You were responsible for scouting out a new route over the mountains towards Italy, on which women, men and children could be smuggled south.

Exactly. At that time I remembered an American sketch plan of the border in my documents. I looked at it and discovered a kind of spit of land. The American zone bordered directly on Italy at the Krimmler Tauern! Aba Gefen from the „Bricha“ and two other gentlemen invited us to drive to the border to have a look. And then I scouted out how we could make the way via Krimml. Finally I drove up the road to the Krimmler Tauernhaus with a car. The last hundred meters the wheels didn’t want to go, they spun, it was such a gravel road. My co-drivers said to me, „You know what, Feingold, turn around and go up the wrong way.“ And just imagine (laughs out loud) … That worked, we drove the last 100 meters like that!

Was mountain guide Viktor Knopf already there at that time, who guided very many people over the Krimml Tauern?

Knopf was a refugee who came from Breslau/Wrocław. He spoke very good German and he took over the illegal leadership of the organization „Bricha“ in Saalfelden. He put together the groups that were brought to the camp. At 11 o’clock at night, four or five drivers came with their trucks and loaded up 30 people each. At that time, the road from Saalfelden to Krimml was very difficult to drive on. You could only move forward very slowly. In Krimml, the people landed at 3 or 4 in the morning. It was summer, it starts to get light at that time. And the gendarmerie is standing there. And they ask themselves, what do they want there? Then they realized that they were Jewish refugees. And we told them that we were going to the Tauernhaus and so on. The officials asked in Salzburg what we should do with the people and the man from the Security Directorate said: „I don’t know anything about it, you have to ask Vienna“. So you call Vienna, the Ministry, and at that time the Minister of the Interior was a certain Oskar Helmer, and Mr. Helmer says: „The gendarmes should close the windows and draw the curtains, it’s none of their business.

„The gendarmes should close the windows and draw the curtains, it’s none of their business“

And they should not look out of the window.

Exactly. They should „not look out of the window“. And so the transports continued, always according to the same pattern: they left Saalfelden late in the evening and arrived in the morning at 3 or 4 o’clock. Then the people went up to the Tauernhaus. During the day, the people were fed, everything was prepared, they could rest and in the evening they went on. The reason why one went in the evening and at night with the people, one has only inculcated them, you must stop on the right – when it becomes narrow – at the rocks. They should not see where you lead them there, otherwise no one would have gone with them. Fortunately, we had no accidents.

There were no accidents, no injuries?

Yes! I can even remember one case. Doctor Löschner, who built the Alpine Peace Crossing, invited ten or fifteen people who had been brought over in 1947 to come to Krimml in the first year, I think. And of course they talked to them and a woman of – well I don’t know – 60 years she was, „Yes I can remember, my mother carried me“. Yes, how did her mother carry her? „In the belly.“ A few days later, after they came to Milan, the mother gave birth. So you have to understand that the woman went along the way already heavily pregnant. After all, such a column has been on the road for ten hours. They usually arrived in Kasern at dawn.

Did the people in Pinzgau, i.e. in the region, notice this flight movement?

No one has taken notice.

Was there any support or …

They didn’t care and just meant away, away with them.

Why I asked about Viktor Knopf before: When did the first hike over the mountain take place?

In July. In July, August, September, in these three months we brought down 5000 people. Weekly at least three times and all three times Knopf went along. And went back again.

In a book published by a South Tyrolean publishing house, I found a statement by Viktor Knopf where he says: „There will have been something like 8000 people who went over the mountain.“ How many Jews actually went over the Krimml Tauern?

Did the proclamation of the State of Israel put an end to the help for escaping?

With the establishment of the State of Israel, of course, it all stopped.

Who, Mr. Feingold, actually decided who could cross the Tauern?

Only people who were able to walk came to Saalfelden. In order to prevent, let’s say, old people from having to stay there. No one should be left behind.

Is it true that the Bricha attached importance to only the young and able-bodied men and women going over the mountain? They thought of the resistance struggle and the building of the kibbutz movement, older people would have been a burden for the escape movement.

That’s right, the older people were then smuggled down by other means, by train, with false or real papers. And the rest just remained. One must not forget that there were still camps here until 1950, 1952.

How was it possible, Mr. Feingold, that people from different parts of Europe set out for Saalfelden in Salzburg, in order to go from there – as you described it – over the Krimmler Tauern to Italy? But there was no cell phone. How did people find out about it? How did people know that there was a route to Israel via Saalfelden?

The Jews formed their own brigade in Italy and fought as part of the British army. The Mafia helped to occupy Sicily, the unit then moved up the boot and was eventually stationed in Tarvis. Tarvis had already been liberated in 1944 and so many Jews from Romania, from Poland, etc. came to Tarvis. And members of this brigade helped these Jews to go to southern Italy, and from there to Israel via Greece. Because, as we know, the British were against Jews going to Palestine. The British – when they found out about the activities of this brigade – transferred this unit to Belgium and disbanded it a little later. This group then organized itself and managed to organize whole trains, to supply people with false papers and to bring these people across Germany, down through Austria to Italy. They really did wonderful things. Hundreds of thousands of Jews were brought south this way.

Those people who went from Saalfelden to Krimml and from there to Ahrntal, did they make it to Israel?

Yes, most of them made it to Haifa. They settled down and were able to build up an existence.

For at least 70 years, Mr. Feingold, you have been reporting in schools, at universities or at the Vienna Burgtheater in „The Last Witnesses“ about the crimes of the National Socialist regime. And about what happened to you in concentration camps, what you experienced. What do we have to pay attention to today? What must be prevented?

This must not be repeated. And until my dying day, I will argue that you have to learn your history. Parents must pass this knowledge on to their children. That’s what it’s all about. You know, I am very proud today when students come to me and say – like recently, I should order them a nice greeting from my mother. And I think to myself, I can’t remember the woman. The student is maybe sixteen or seventeen years old. And then the one says, she also thanks you for a lecture I gave a long time ago. I think that’s nice. That the second generation comes to me. And if the mother can remember our meeting, then something has stuck. And that makes me happy!

„This must not be repeated. And until my dying day I will plead that one must know one’s history.“

Information on the Bricha: By the fall of 1945, the „Bricha“ had organized throughout Austria and worked closely with the Jewish Central Committee in Vienna. Its commander was Asher Ben-Natan, a native of Vienna who had emigrated to Palestine in 1938; the commander in Salzburg was Aba Gefen, a former partisan from Lithuania).

This interview with Marko Feingold appeared in full in the magazine „Das jüdische Echo“ in issue No.66 – 2017/18.

Information on the authors: Rudolf Leo is a historian and has written, among other things, the volume „Der Pinzgau unterm Hakenkreuz“ (2013). Michael Kerbler is a journalist, was ORF editor-in-chief, head of the Ö1 broadcast series „Im Gespräch“ and is a long-time moderator of the APC dialogue events in Krimml.